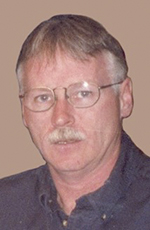 Jeff was born Dec. 19, 1956, in Albert Lea to parents Gene and Darlene (Butler) Engel. He was raised in Glenville, attending First Lutheran Church of Glenville and graduating from Glenville High School.

After high school Jeff went on to hold jobs at Red Owl, Winnebago Industries in Forest City, Wilson & Co. and Farmstead, and as caretaker of the Freeborn County Fairgrounds for several years. He lived in several other states, but settled in Belton, Missouri, in 2011. He worked in refrigeration at Smithfield Foods.

Jeff married Tammy (Terry) Hutchinson on Aug. 31, 1996, in Duluth. Two sons were born to this union. In his free time, Jeff enjoyed fishing, woodworking and coin collecting. He was a very good cook and baker. His memory will live on fondly through his family.

Memorial services will be at 11 a.m. Thursday at Bonnerup Funeral Service in Albert Lea, 2210 E. Main St.,  with visitation starting at 9 a.m. The Rev. Nancy Hansen will officiate. Interment will be in Graceland Cemetery in Albert Lea.