The ballot measure called to extend the sales tax for either 15 years or until $15 million has been collected. Funding collected goes toward water quality improvements, including the dredging of Fountain Lake. 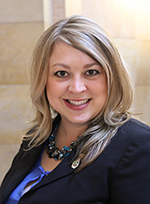 “I am feeling that the community support is on point to move forward with all the initiatives for healthy waters,” said Albert Lea Lakes Foundation President Laura Cunningham, who championed the effort for the renewal.

She thanked everyone who offered their support.

“Nine years of ups and downs, and it is all worth it in the end,” Cunningham said.

Shell Rock River Watershed District Administrator Brett Behnke said he was reinvigorated by the support shown by the community.

“Our lakes are the heart of our community, and we will march forward in our efforts to clean up our lakes,” Behnke said.

He said the next step will be lobbying for the renewal at the state Legislature.

“We appreciate and will do everything we can for the community at the state level,” he said, noting that though it may be “a mountain to climb,” he is hopeful the renewal can be included in the next tax bill.

The local sales tax was initially passed by referendum in November 2005 by more than 80 percent of voters and went into effect April 1, 2006. It generates more than $1 million a year and has allowed the district to bring in funding from the Lessard-Sams Outdoor Heritage Council and other state agencies for projects such as the newly-constructed Albert Lea Lake dam, controlling rough fish and stream banks, shoreline restorations and Wedge Creek restoration.

The renewal will allow the district to continue to utilize the local funding source as a way to leverage state and federal grants and other funding.

“This is really a win for the community,” Behnke said. “They’ve taken ownership of it, and are the catalyst for us to succeed.”

Looking ahead, Cunningham and Behnke said they look forward to helping the Fountain Lake dredging project be successful. Once that has proven to be successful, they will move forward to Albert Lea Lake.

The Watershed District is waiting for Department of Natural Resources approval to build a confined disposal facility, which will be used to contain sediment captured from Fountain Lake.

District officials stated they would be ready to begin building that facility this year.