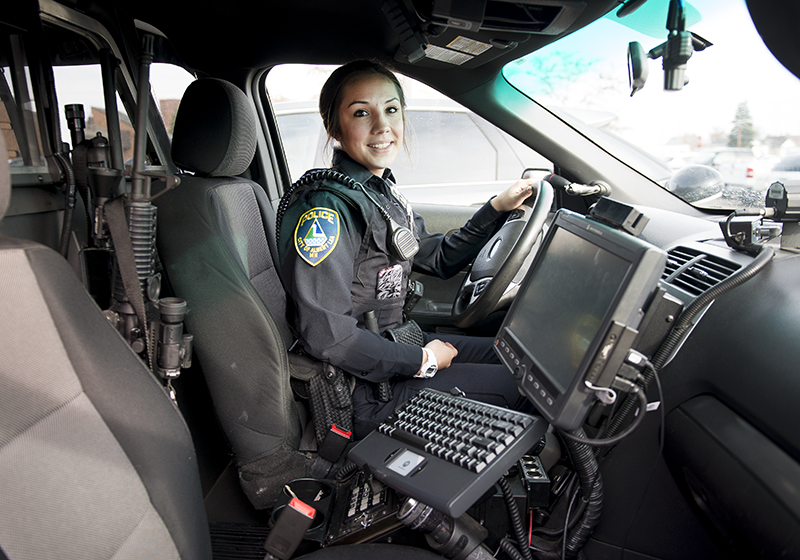 Meagan Schroeder has been an officer with Albert Lea Police Department for about one month. Colleen Harrison/Albert Lea Tribune

Meagan Schroeder, 23, started with Albert Lea Police Department in September. Originally from La Crescent, Schroeder interned with the Albert Lea department in summer 2015. She got her four-year degree in criminal justice from Winona State University, and then completed her skills training at Rochester Community and Technical College.

Starting out as an art major, Schroeder said she started to gravitate toward a career in law enforcement during her sophomore year of college at WSU. She said the decision surprised her family at first, but they’ve been very supportive along the way.

“I always knew I wanted to do something where I’d be helping people and working with people,” she said.

Being a newer officer, Schroeder said she’s in the middle of a 12-week training portion of her job where she works with a field training officer. During those 12 weeks she goes over firearms training, self defense and CPR, among other duties and skills — all while learning the layout of the city. During that time, she is still able to go out on calls for service, as well, and said she has already responded to some tough situations.

For those considering going into law enforcement, Schroeder said getting prior experience through internships, ride-alongs or security jobs helps a great deal.

“Get as much experience as you can without having a law enforcement job,” she said.

Being a female officer in a generally male-dominated field, Schroeder said there are some misconceptions that come with that — especially when it comes to physical size and strength. She said she has seen both male and female officers either her size or smaller be able to do as much, and in some cases more, than their more physically-imposing fellow officers.

“Being someone who’s small, we’re trained to use that to our advantage,” she said.

Schroeder said she has liked getting to know the area, and enjoys Albert Lea’s lakes and taking her dog to the dog park. The new job and the new city seem to be a good fit.

“I’m very happy with it,” she said. “My co-workers are really nice to work with.”

Interesting fact: likes to hike and exercise in her spare time