Memorial services for Rudolph “Rudy” J. Phillips, 95, will be at 11 a.m. Friday at All Saints Catholic Church in New Richland. The Rev. Russell Scepaniak from St. Theodore Catholic Church in Albert Lea will officiate. Visitation will be one hour prior to the service at the church. Military honors will be accorded by local servicemen’s organizations, Veterans of Foreign Wars and American Legion. Interment will be at Hartland Cemetery. Online condolences are welcome at www.bayviewfuneral.com. 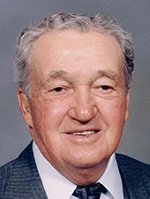 Rudy was born to Matthew and Angeline (Hubert) Phillips near Waterloo, Iowa, on April 19, 1921. He grew up near Medford and Hartland, attending country school. In 1940, there were few jobs to be had so he found work where he could in southern Minnesota. At age 19 he went into the Civilian Conservation Corps (CCC) and was paid $30 a month, with half of that being sent home. He also worked on a farm near Pipestone for room and board and picked corn by hand near Twin Lakes for 5 cents a bushel. In 1941 he worked on the railroad near Marshall for 40 cents an hour plus room and board.

In April of 1942, Rudy enlisted in the United States Marine Corps. After basic training in San Diego, he served in the South Pacific on Wallace Island, Marshall Island, Guadalcanal and Guam, and took part in the invasion of Entewetok. He contracted impetigo, and was sent to Klamath Falls, Oregon, to recover from dengue fever and elephantitis.

After his discharge from the Marines, Rudy married Verleen Newgard in New Richland on Nov. 21, 1946. They were married for 37 years until her death in 1984.

Rudy farmed near Hartland for over 50 years and many times remarked how much he loved farming. In his younger years he enjoyed deer hunting, pheasant hunting and fishing. He took many hunting and ice fishing trips with friends. He was an avid bowler and pool player, and at the age of 60 took up golf. He often said he wished he’d started golfing earlier, since he loved the sport so much. He golfed in several leagues, mostly at Oak View Golf Course in Freeborn — where he met his dear friend of 24 years, Helen Schoen. They golfed together four or five days a week for most of those 24 years.

Rudy got two holes-in-one in his career and won the Oak View League Championship in 1991. Helen, along with her children Steve, Peggy, Jim and Pam were very special in his life. Rudy loved playing cards and spent many winters in Las Vegas or Laughlin, Nevada, which was also a wonderful place for winter golf. Rudy was a member of All Saints Catholic Church in New Richland and a member of the Albert Lea American Legion for over 70 years.