Steven Willard Steinhauer, 71, of Blue Earth, formerly of Walters, died Friday, Nov. 4, 2016, at his home. A funeral service will be at 11 a.m. Wednesday at United Lutheran Church in Walters with the Rev. Don Rose officiating. Visitation will be from 4 to 7 p.m. Tuesday at Bruss-Heitner Funeral Home in Wells and will continue one hour prior to the service at the church. Interment will be at Walters Cemetery with military honors accorded by Kiester Legion Post No. 454. Bruss-Heitner Funeral Home in Wells is assisting the family. To leave an online condolence, visit www.brussheitner.com.

Steven was born to Willard and Marvel Steinhauer on Jan. 12, 1945, in Albert Lea. He grew up in rural Bricelyn where he helped his father and grandfather on the family farm, and he attended Kiester High School. In 1962 he enlisted in the United States Navy, where he served on the flight deck of the USS Enterprise. He was honorably discharged in 1965. His son, Steven Jr., was also born in 1965. After his discharge from the Navy he lived in the Albert Lea/ Mankato area and worked for Northstar Concrete. He then moved to Farmington, New Mexico, where he worked in the oil fields. 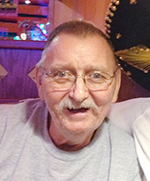 His daughter, Christina, was born in 1967 and daughter, Barbara Jo, in 1971. He moved to Denver, where he worked in sheet metal HVAC; it was there that he met Linda Spielman. They were united in marriage in Englewood, Colorado, on Aug. 25, 1979. Steve and Linda then made their home south of Bricelyn until moving to their Walters farm in 1983. Their son, Cory, was born in December 1990. Steve took an early retirement from Thermo King in 1995 due to a previous work injury in 1967. They moved to Blue Earth in 2015, where they were still residing.

He is preceded in death by his parents Willard and Marvel Steinhauer; in-laws Dick and Jane Spielman; sister-in- law, Kim Steinhauer; and brother-in- law, Gil Aaeng.