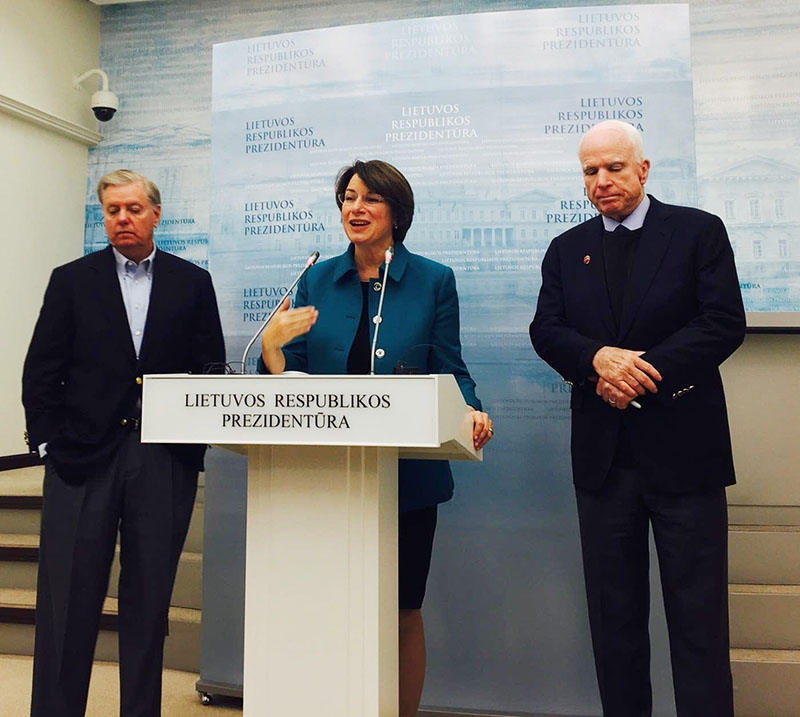 By Steven John and Cody Nelson

U.S. Sen. Amy Klobuchar said the Obama administration’s punishment of Russia on Wednesday for its meddling with the presidential election is only the start of what could involve economic sanctions by Congress.

“If we were just to roll over and do nothing, they would just continue to do it,” Klobuchar said, citing Russia’s “longstanding practice” of cyberattacks on other governments.

President-elect Donald Trump has dismissed any reports of Russian attempts to influence the election, and he could reverse the sanctions when he takes office next month.

But Klobuchar said she’d be “stunned” if he did because of bipartisan support for the punishment, which ousted nearly three dozen Russian officials from the U.S. among other measures.

“He would literally be siding with Vladimir Putin against bipartisan support in Congress and the entire intelligence community in the United States of America,” Klobuchar said. “I just hope he would never do that.”

Initially, Klobuchar said she worried punishing Russia for the cyberattacks — which included hacks of the Democratic National Committee — would look like “sour grapes” for the party that lost the presidential election. But she said it helped that Republicans like Arizona Sen. John McCain were outspoken that the issue was about democracy and not who won or lost the presidency.

Klobuchar spoke with MPR News host Steven John via phone from Lithuania where she was traveling with a group of other senators including McCain and Sen. Lindsey Graham, R-South Carolina, who both support the sanctions.

“(They) made it very clear that this isn’t a political issue one side and the other because the next time, another political party, the Republicans, could be hit,” Klobuchar said. “Another country could do this to our elections.”

Asked if sanctions were symbolic or practical in effect, she said, “I think it’s practical and it is strong and it is just the beginning.”

The Republican-led Congress will take a deep look at Russian involvement with the U.S. elections, Klobuchar said, and that could mean economic sanctions. She did not specify beyond that.

She also said the Senate needs to look thoroughly at Rex Tillerson, Trump’s nominee for secretary of state. In 2012, Tillerson received the Order of Friendship from Putin, the Russian president.