On a cold and snowy day, a beloved mother, daughter, sister, grandma, great-grandma and friend was called home to be with the Lord. Carolyn Marie (Anderson) David, 69, formerly of Owatonna, died Thursday, Dec. 8, 2016, at Colony Court Assisted Living in Waseca. A funeral service will be at 11 a.m. Monday at Zion Lutheran Church of Lemond, 7126 SW 98th St. in Ellendale, with the Rev. Patti Meyer officiating. Visitation will be from 2 to 5 p.m. today at Zion Lutheran Church and will continue one hour prior to the service on Monday. Interment will be at Hillcrest Cemetery in Albert Lea. Bruss-Heitner Funeral Home in Wells is assisting the family. To leave an online condolence, visit www.brussheitner.com. 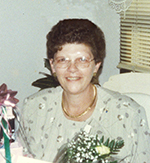 Carolyn Marie was born Sept. 15, 1947, in Albert Lea, the daughter of Allen and Evelyn (Rupp) Anderson. She grew up in rural Clarks Grove, attended District 5 Country School and graduated from Albert Lea Senior High School in 1965. After graduation she worked at Owatonna Tool Co., where she met James David. They were united in marriage Dec. 2, 1967, in Clarks Grove, and to this union three daughters were born. After 38 years of marriage, the couple divorced. Carolyn worked for Happy Chef and then Federated for several years until retirement. She was a collector of many things, especially angels and cardinals.

She enjoyed her time at the lake cabin, fishing, flower gardening and shopping with her daughters. She loved spending time with her grandchildren and great-grandchildren.

She is preceded in death by her grandparents; father, Allen C. Anderson; and sister, Jane (Anderson) Dahle.