Ginger Mae Wrolson, 34, of Mason City, formerly of Hampton, Iowa, passed away Monday, Dec. 19, 2016, at University of Iowa Hospitals and Clinics in Iowa City. She was born Feb. 15, 1982, in Albert Lea to Angela (Blowers) Wrolson and Don Wrolson.

Ginger moved to Hampton in 1994, where she attended Hampton Middle School and then graduated from Hampton-Dumont High School in 2000. After high school, she attended North Iowa Area Community College in Mason City and graduated in 2003.

Ginger started her working career early by insisting on getting her first job at the age of 14 at Seven Stars Family Restaurant in Hampton. She worked there throughout high school, saving enough money to buy her first car 100 percent on her own — which made herself and her family very proud of her accomplishment. She worked at Perkins in Albert Lea with her mother and grandmother while attending NIACC. 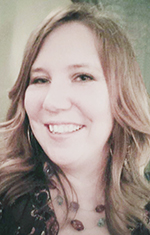 After NIACC, Ginger worked at Community National Bank in Mason City and then IC Systems. When Seven Stars Family Restaurant opened a second restaurant in Clear Lake, Ginger also worked there as a second job —  giving Nick some experienced help. Then, after more NIACC classes, she moved on to Good Shepherd Health Center in Mason City. There she worked in the Alzheimer’s unit, where she loved all her patients and coworkers. Ginger was employed at Good Shepherd Health Center at her time of death. She was always a strong-willed, determined and free-spirited person. Ginger was well-liked and had many friends whose friendship she cherished and was always thankful for. She loved all the pets she had from childhood to adulthood and could tell you many stories about them. Ginger had a love of life and enjoyed many activities.

She was preceded in death by her grandparents Ordean (Evelyn) Oakland of Austin, Robert Blowers of Austin and George Wrolson of Albert Lea.

Ginger was and is loved and will be greatly missed by her family and friends. Ginger was a registered organ donor, so she is helping others — which is a comfort during this difficult time.

A memorial service will be at 11 a.m. Wednesday at Faith Baptist Church in Hampton. Visitation will be from 4 to 7 p.m. Tuesday at Sietsema Vogel Funeral Home in Hampton. Burial will take place at a later date.