Funeral services for Ivadell L. Bartness of New Richland will be at 11 a.m. Thursday at Friedrich Funeral Home in New Richland. The Rev. Charles Espe will officiate. Visitation will be from 4 to 7 p.m. Wednesday at the funeral home and one hour prior to the service. Interment will be in Hartland Cemetery in Hartland. 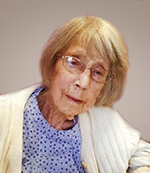 Ivadell was born April 18, 1922, in Freeborn County, the daughter of Henry G. and Rena K. (Kaiser) Beneke. She was a graduate of Freeborn High School and on March 29, 1947, was united in marriage to Carroll Bartness in Hartland.

Ivadell worked as a secretary at Wilson & Co. for several years and farmed alongside her husband. She was active in the church circle and Bible study, loved gardening and traveling with her husband. They would spend winters in Florida, Texas or Arizona, traveling there in their motor home.

She is survived by her two sons, Gary Bartness of New Richland and Del (Carol) Bartness of Buffalo Center, Iowa. There is one grandchild, Jason Bartness; one brother, Merle Bartness, of Ellendale; brother-in-law, Eugene Worke, of New Richland; and sisters-in-law Deloris (Howard) Sigurdson of Albert Lea and Jeannie (Elvern) Holland of Ellendale.

She was preceded in death by her parents; husband, Carroll; and sister, Evelyn (Sidney) Borge.