Memorial services for Joanne Marie Jenson of Albert Leawill be at 11 a.m. Friday at the Bonnerup Funeral Service chapel. Friends may greet the family one hour prior to the service at the chapel. Interment at a later date will be at Fort Snelling National Cemetery.

Joanne was born July 19, 1933, in Janesville, the daughter of Irene Hess and Clifford Chrisman. She was a graduate of Albert Lea High School. After high school she was united in marriage to Arthure Winsmore Deal, and later in life to Norval Jens Jenson, both of whom preceded her in death. 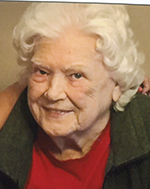 Joanne was a member of Grace Lutheran Church and was active in the caring and sharing. She was employed as an administrative secretary at Hormel Corporation, a legal secretary in Janesville, account supervisor at Queen’s Products in Albert Lea and for many years worked in the cafeteria at Hawthorne Elementary School, retiring well into her 70s.

Joanne enjoyed crossword puzzles, playing Scrabble and 500, but — most of all — loved to spend time with her children and grandchildren.

Joanne was a wonderful loving mother, grandmother, sister and friend. She was her family’s angel on Earth. They will miss her greatly but are so happy she is at peace.