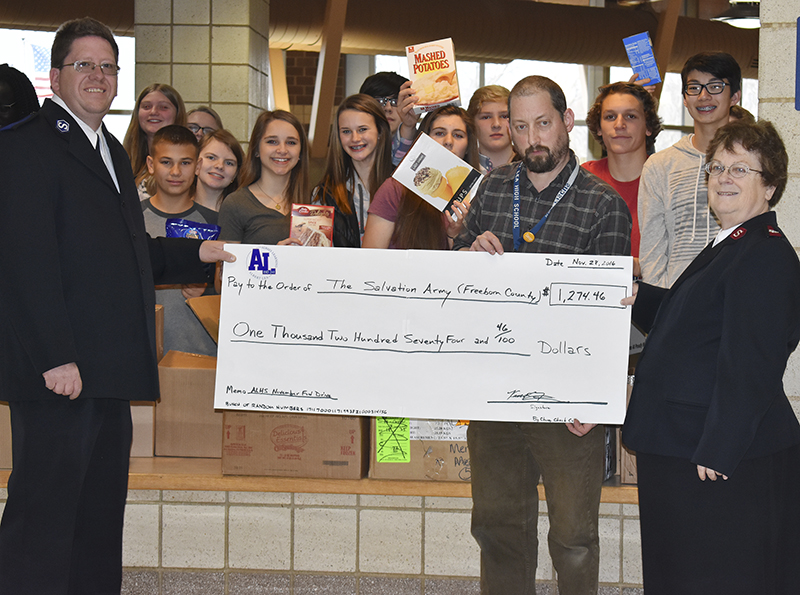 Albert Lea High School students and teachers helped raise $1,274 and nearly 600 pounds of food last month in a fundraiser that will help The Salvation Army feed people this Christmas season.

Students raised the money during second-hour classes on the majority of Mondays, Wednesdays and Fridays in November.

The Salvation Army received the food and the monetary donation Monday at the high school.

“I was blown away by the generosity,” said Ken Fiscus — coordinator of the food drive — adding that one teacher gave $264 for one class.

“The food is nice, but the food drive would be more efficient if you gave the organization the money so they can buy the food they want,” he said.

Fiscus said 29 of the 54 second-hour classes at the high school participated, noting that he welcomes competition in raising money for those in need.

“The way we’ve had the best luck in the past was if one teacher would go talk smack to another teacher’s class, ‘We’re going to beat you guys,’ and then they go at it,” he said, adding that one classroom brought 1,000 pounds of food one year.

Fiscus said the project is necessary.

“It’s something that needs to be done, and this food stays local,” he said.

It gives a chance for the students to help each other by raising the funds.

“We are feeding our own students,” Fiscus said. “I don’t know the percentage, but every classroom has somebody that is not sure of what they are going to have for food that day.”

Salvation Army office manager Kathy Belshan said she was pleased with the school’s food drive. The items will allow the organization to purchase food items it is short on, such as peanut butter, pasta and fruits, from Channel One Food Bank.

“We can actually buy more that way,” she said.

Belshan thanked students and staff for their contributions.

“That was very helpful,” she said.