Woodson appeared on the charges Monday after she turned herself in on a warrant. 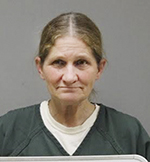 Freeborn County Attorney David Walker argued that conditional bail be set at $2,500 on each file.

Attorney Jeremy Clinefelter of Austin — who appeared in court on Woodson’s behalf — said Woodson was confused on the date she was supposed to appear.

Court documents state Woodson was charged in the first file after she reportedly cashed a $389.90 check made out to herself Aug. 8 at an Albert Lea business. The check was reportedly returned by a bank for being altered/fictitious.

An Albert Lea detective learned from the bank that the account number Woodson used was non-existent, and the payee was not from the town Woodson claimed it was from.

Woodson was charged in the second file after the alleged victim told the detective on Oct.7 that a check was paid from her account that she did not write.

The payee on the check was reportedly not hers, and the check was made out to Woodson for $345.67, court documents state. The alleged victim said she did not know Woodson and had not written her a check.

The check was reportedly fraudulent.

Her next court appearance is scheduled for Dec. 15.

Woodson is charged with one count of gross misdemeanor issuing a dishonored check in two separate files. Settlement conferences are scheduled for Jan. 5, and a jury trial is scheduled for April, if the case has not been settled by then.

Offering a forged check carries a maximum sentence of five years in prison and a $10,000 fine.