Al Batt: How much food do deer need in winter? Why are doves still here? 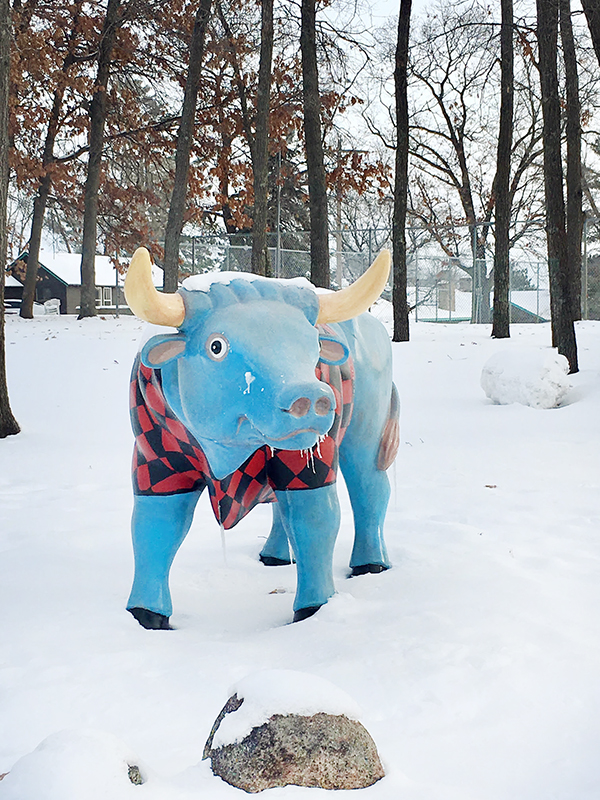 Babe the Blue Ox becomes even bluer at 15 below. Al Batt/Albert Lea Tribune

“Everything is nearly copacetic. I’m trying to lose a pound or two. I have six-pack abs, but I protect them with a layer of fat. I had some broth for dinner yesterday. It’s meat tea. I even passed on purchasing a Nut Goodie when I bought a lottery ticket (the poor man’s retirement plan). I’m trying to quit eating in my car. No more getaway lanes of fast food restaurants for me. Popcorn is going to be my big vice. I like going to the movies and watching the popcorn. Films give me something to do while I eat popcorn. Much better than lima beans. I remember sitting at the kitchen table, staring at those stupid lima beans on my plate. Ma called them butter beans, but no matter what they were called, they were bad eating. Ma told me how good they were for me and that she had paid good money for those beans, but my mouth remained clamped shut. Ma’s final resort was that dreaded statement, ‘Just think of all those starving children in China who would love to have these butter beans.’”

I’d heard a great horned owl hooting in the night. “Who’s awake? Me, too,” it called.

A woodpecker drummed on a resonant limb in the morning’s light.

Spring must be just around the corner, but I’m not sure which corner.

Several callers told of mysterious critters. There are many of those. Most of them are heard while camping in a tent in the middle of a dark night.

A brown thrasher has been wintering in my yard. Most of the members of that species are out of town on business this time of the year. I put out peanuts for that lovely bird.

Jack Brush of New Ulm wondered why so many mourning doves stay here over the winter. Mourning doves are common at bird feeders all year, but the doves you see in winter might not be the same as the ones seen in summer. Northern birds might fly as far south as southern Mexico. Those that breed in central and southern U.S. might move a few hundred miles or stay put. A mourning dove’s migration is complicated. It’s called differential migration and is related to age and sex. The young leave first, then the females and the males go last. Some birds, most of them males, don’t migrate at all and remain in the north. The males brave bad weather and risk frostbitten toes in order to get a jump on establishing a prime breeding territory early in the spring. I love hearing the whistling sounds made by doves when they take flight. The high-pitched noise comes from the bird’s wings and is believed to provide a built-in alarm system. It warns others of danger while possibly startling a predator.

“I saw some round fruits in the supermarket that were claimed to rid a house of spiders. Do they work?” Only if you use one to smash a spider with it. These are hedge apples, the fruit of the Osage orange, a small- to medium-sized deciduous tree. The belief that hedge apples are effective for insect and spider control is widespread and persistent. It’s claimed that placing hedge apples around a foundation or inside a basement will repel spiders. Iowa State University researchers extracted compounds from hedge apples that when concentrated, were found to repel insects. The scientists also found that the natural concentrations of these compounds in the fruit were too low to be an effective repellent. I’ve seen spiders crawling over hedge apples on the ground. Save your money. If you find spiders bothersome, use your vacuum cleaner to remove them.

“How much food does a deer need in winter?” It depends on the severity of the weather and the size of the animal, but I’d suspect 3 to 6 pounds per day.

Rod Meyer of Mankato wrote, “Watching the feeder this morning, I have one bright yellow goldfinch who must have forgotten that it is winter in Minnesota.” It’s an odd molt or optimistic feathers in early January. An interesting winter plumage characteristic in American goldfinches that I look for is the bright yellow shoulder patch that develops in the fall of a male’s second year. Until then, the patch is made up of olive and black feathers similar to what shows in a female. Perhaps it offers a female an inkling of how brilliant a male’s plumage would be in the spring. American goldfinches follow a pattern of molting. Beginning in September, and lasting six to eight weeks, they molt all their feathers, ending up with a new set of drab feathers heading into winter. In the spring, they grow new body feathers and the males acquire a bright yellow breeding plumage. The wing and tail feathers remain from the fall. As the wing feathers age, the pale buff edges fade to white and disintegrate, so that by the end of the summer the wings look black.

“Talent is insignificant. I know a lot of talented ruins. Beyond talent lie all the usual words: discipline, love, luck, but, most of all, endurance.” — James Baldwin