Al Batt: Why do birds tuck heads under wings? Why are eagles in groups? 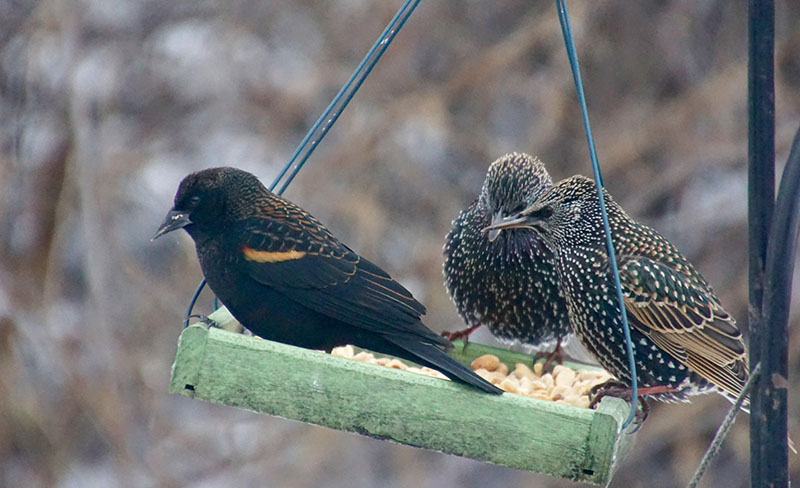 A red-winged blackbird stops at a feeder for a Christmas treat. - Al Batt/Albert Lea Tribune

“Everything is nearly copacetic. I had a sublime Christmas. Got a big Swiss Army knife for a present. It has a shovel, a machete and a ball-peen hammer. I was going to get a flu shot, but I’ve decided to wear a sneeze guard instead. I was working on the snowblower attached to my tractor when an insurance salesman stopped. He asked me what I was doing. I told him that I was replacing a pin. He wondered how often I had to replace that pin. I told him that I replaced it every time it broke. He tried to sell me something, but I wasn’t buying. He thought he was the spray cheese on my cracker, but he didn’t know paint from horse manure. He struck me as a man who wouldn’t give an aspirin to someone who had a concussion. I told him that I could please only one person per day and today wasn’t his day. He was a slacker like my dog.”

“I’m dog sitting my sister Cruella’s dog. When a rabbit runs by my dog–nothing. When Cruella’s mutt sees the bunny, it barks. Then my dog nods.”

I saw a flock of Canada geese fly over our house on Sunday. It surprised me. My job requires some air travel. The most expensive days to fly are Monday, Friday and Sunday. The cheapest days to become airborne are Tuesday, Wednesday and Saturday. Why is a goose flying on Sunday? But what is money to a goose?

I put seed into the feeders. A chickadee flew in before I finished. I don’t think the world could ever have too many chickadees. The black-capped chickadees were singing. Not their signature “chick-a-dee-dee-dee” call, but a two-toned, whistled “fee-bee” song that means that spring is coming and they are in love.

“Why does a bird tuck its head under a wing?” It may look like it, but birds don’t tuck their heads under their wings. They rest their heads on their backs while nuzzling their beaks into their back feathers. This allows for heat conservation and rest for neck muscles.

“Why do I see bald eagles in bunches?” Bald eagles tend to stay close to lakes and rivers where they can find fish, their primary food source. Winter forces bald eagles to adapt their diets. Bald eagles can survive on a variety of prey. They are opportunistic carnivores that feed on a wide variety of foods. When freezing temperatures and snow cover occur, bald eagles migrate to areas with open water. They congregate in areas providing an abundant food supply. When food is available in a limited area, bald eagles gather there in large numbers. Young eagles learn to hunt and benefit by watching experienced adults. They often pirate (steal) a meal from another eagle.

“I watched a bird wipe its bill on a branch. What’s going on there?” Avian bills are made of keratin, the same material as human hair and fingernails. In most birds, this keratin grows continuously throughout life and is worn down by normal activity. Feaking, the term for rubbing the beak clean on branches or other hard surfaces after eating, removes blood and other debris from the beak, as well as trimming the beak.

“Why do I see so many hawks along the highways?” Most of them are red-tailed hawks. They typically have mottled backs and white fronts that often have dark belly bands. This hawk’s short tail gives it a look described by many as a football shape. My eye doesn’t quite see it that way, but the hawks find the poles, posts and trees situated along our roads as perfect places to hunt for voles and mice living in the grasslands of ditches and medians. Redtails make a slow dive with talons outstretched when pursuing prey.

“What is your definition of a nature lover?” A nature lover is everyone, whether they know it or not and whether they want to be one or not. This includes the guy whose idea of nature is something he stepped in. Nature is inspiring, intimidating, enchanting and omnipresent. There is no reason not to celebrate it.

“I come to my solitary woodland walk as the homesick go home. I thus dispose of the superfluous and see things as they are, grand and beautiful.” — Henry David Thoreau