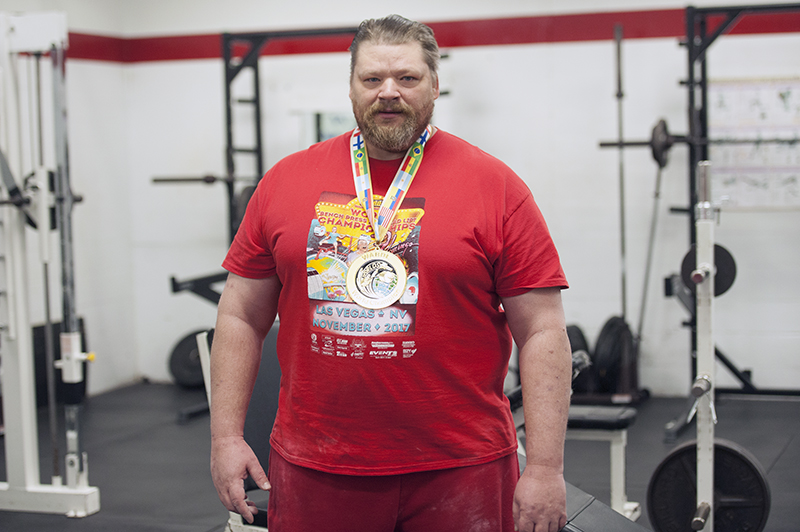 Tom Guiney stands with his most recent World Championship gold medal in the basement of the YMCA where he has trained while being home for the holidays. - Tyler Julson/Albert Lea Tribune

A 1985 graduate of Albert Lea, Tom Guiney started lifting weights when he was 16 years old. Now, 32 years after graduating, Guiney resides in Oklahoma and has traveled the country racking up multiple titles in the sport of weightlifting. 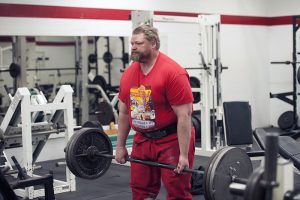 Guiney has won 10 world titles, six national titles, 12 state titles and 16 regional titles in weightlifting. He has competed in many state all over the country. – Tyler Julson/Albert Lea Tribune

“I got picked on as a kid and I got sick of that,” Guiney said. “So I decided to come down here and pump some iron. I also wanted to get stronger for the sports that I participated in.”

Guiney said he decided he wanted to get involved in competitions not long after he got started. About a year into training is when he said he realized that he might be pretty good at powerlifting. He said he never expected to win much, but he did all right as a teenager competing against men.

Guiney is the Oklahoma state record holder in the super heavyweight division with a deadlift of 617.2 pounds.

He talked about what it’s like for him to see all of his hard work payoff.

“It feels great,” he said, “but I really haven’t thought about it too much because I’m not done yet. I just keep getting ready for the next one.”

He said he want to keep doing this for as long as he can hopefully for the rest of his life.

Guiney said he usually participates in about two to three competitions every year. He is on a rigorous workout schedule, he has designated days he works on deadlifting, squatting and bench pressing. On the other days he said he is usually working with kettlebells and improving his conditioning. When is comes to his diet, he said there is no strict diet plan he sticks to. He eats high amounts of proteins and carbohydrates, other than that he said he pretty much eats whatever he wants to.

In his free time, Guiney said he is an active member of his church in Tulsa, Oklahoma and he enjoys attending concerts, especially heavy metal artists.

He also had some advice for the younger generation that think they want to try to start lifting weights.

“Start out by learning the basics, learn the fundamentals of the lift,” he said. “Don’t hurt yourself and do not take steroids. Get with somebody that know what they are talking about.”