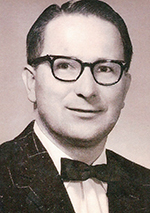 He was a U.S. Navy veteran serving in World War II on the USS Saratoga. He was also a 60-year member of American Legion Post No. 56 of Albert Lea.

He was a longtime employee and store manager for National Foods. He owned Happy House Cards and Gifts before retiring to Arizona in 1984. While in Arizona he also worked for Sun City Recreation Center.

Allen loved golfing, recording two hole-in-ones. He raised Shelties, and was a member of the Kennel Club of Albert Lea. He loved all sports games on TV, and was an especially big fan of the Minnesota Twins and Vikings. In his retirement years he raised flowers, gardens, plants and fruit trees.

Interment will be at Fort Ripley National Cemetery at a later date. Arrangements are entrusted to Sunland Mortuary and Memorial Park in Sun City. Online condolences for the family can be left at www.sunlandmemorial.com.