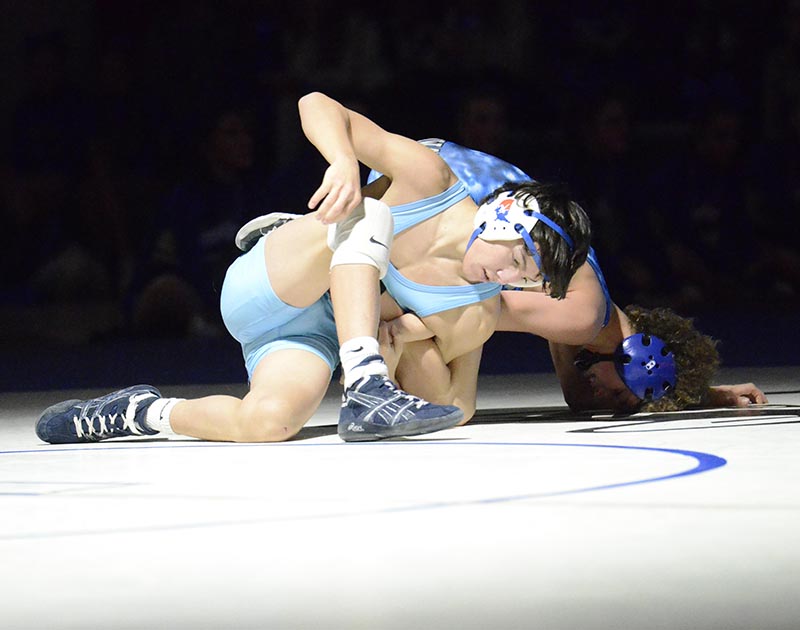 Albert Lea had Owatonna right where it wanted in its biggest wrestling match of the year Thursday night.

The Tigers were up 28-10 on the Huskies with four matches left, but it was Owatonna that left Albert Lea speechless.

The Huskies won the next four matches, including a 4-1 win  by Owatonna’s Goy Tut over Tanner Palmer in the heavyweight class to eek out a 29-28 win in front of a nearly packed house.

Johnsrud dominated his match against Joseph Fox, winning by a count of 21-6. Cantu won an 8-0 major decision over Landon Johnson, as did Hernandez (9-1) over Bryce Goodwin.

The tide started to turn when two-time state champion Peyton Robb beat Albert Lea’s Garrett Aldrich, 13-5. While Hernandez and Nielsen each picked up wins, Nielsen’s victory would be the last of the night for the Tigers.

Alex Bledsoe lost via injury in his match with Owatonna’s Brandon Moen, giving the Huskies six points to close the gap to 28-16.

Albert Lea’s Trent Johnston lost a 13-9 decision to Nick Staska and the Tigers’ Riet Lony was pinned by Griffin Thorn.

Tut completed the Huskies’ comeback when he defeated Palmer.

It was a big loss for the Tigers, who were looking to separate themselves from the rest of the Big Nine Conference.

However, there is still plenty of season left for Albert Lea to show its dominance.

The rest of the schedule includes matchups against conference teams Northfield, Austin and Rochester Mayo.

Albert Lea will compete in the Doc Carr Duals in New Hampton, Iowa, this weekend.