Memorial services for Kenneth J. Sletten will be  at 2 p.m. Friday, January 20, 2017 at First Baptist Church in Clarks Grove. The Rev. Jamie Cameron will officiate. Visitation will be one hour prior to the service at church. Interment will be in the Clarks Grove Cemetery at a later date. Bonnerup Funeral Service is handling the arrangements. 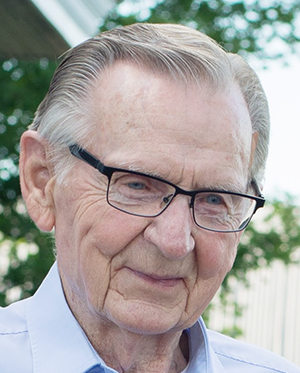 He was born May 26, 1928, to Albert and Alma (Nelson) Sletten. When Ken was a child his mother passed away, so Ken and his brother Henry were sent to live with their Grandma Sletten and uncles Sam and Oscar. Following graduation from Kiester High School, Ken worked as a hired man for Henry Schneider on a farm near Mansfield.

In November 1950 Ken married Iva Benson and entered the Army five days later. Following his discharge, Ken and Iva moved to Clarks Grove, where they raised their six children. Starting life in Clarks Grove, Ken worked at the lumber yard and later for Scott-Kelly Construction, Lembke Construction and in maintenance for School District 241.