Quentin Morland Goskesen was born Aug. 10, 1925, in Kanabec County, near Mora. He was the youngest of four children born to Lars and Anna (Guttormson) Goskeson. He was a first generation American, his father emigrating from Denmark to Freeborn County and his mother emigrating from Norway to Norman County in the 1880s. The family moved to Freeborn County when Quentin was very young, and he attended grade school and high school in Albert Lea. 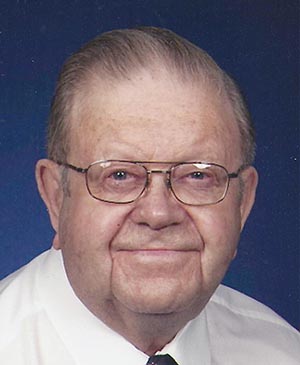 On Oct. 12, 1943, Quentin enlisted in the U.S. Navy, going through basic training at Farragut, Idaho, and serving aboard the LST 1022 in the South Pacific during WWII.  Quentin was united in marriage to Bernice Elaine Baumgartner, the daughter of Walter HC and Harriet Elizabeth (Gifford) Baumgartner, the day before Thanksgiving, Nov. 27, 1946, in Mason City, Iowa. They had six children and lived their lives in Mapleview and Austin.

Quentin worked for Geo. A. Hormel Company for 40 years. He was a member of St. Olaf Lutheran Church and enjoyed working outdoors, woodworking, reading and fishing. Quentin had a great love of aviation.

Funeral services will be at 11 a.m. Friday at Clasen-Jordan Mortuary. The Rev. Susan Li will officiate. Interment will be at Grandview Cemetery with Austin Post No. 91 American Legion and Olaf B. Damm Post  No. 1216 Veterans of Foreign Wars in charge of military honors. Visitation will be from 10 a.m. until the time of the service at the mortuary.