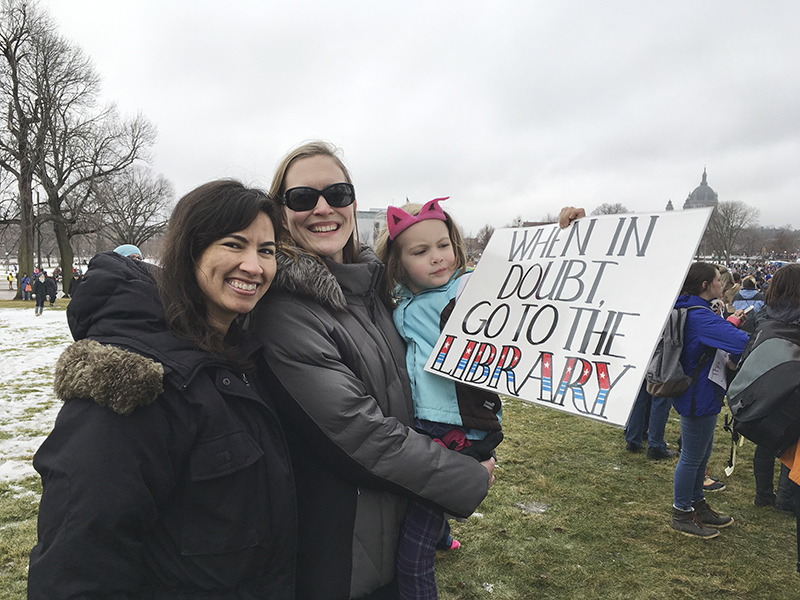 Albert Lean Jennifer Vogt-Erickson and her daughter, Trixie, 4, traveled up to St. Paul Saturday to take part in the rally with her second cousin, Leilani Endicott, left. - Provided

ST. PAUL — An army of women and their supporters estimated in the tens of thousands poured onto the front grounds of the Minnesota Capitol on Saturday to hear a call for resistance and mobilization against Donald Trump’s new presidency.

Carrying signs such as “Keep Your Tiny Hands Off Of My Uterus!!” and “We Will Not Be Silenced!” many demonstrators wore pink caps or scarves and some pushed baby strollers as they streamed to the rally, the same day as marches in Washington and elsewhere in the U.S. and around the world.

Among those participating were Jennifer Vogt-Erickson of Albert Lea and her 4-year-old daughter, Trixie.

Vogt-Erickson said she had seen posts on Facebook about the Women’s March on Washington back in December and had a friend who was attending. Though Washington, D.C., was too far away to attend, she found out there was one happening in St. Paul and decided it would be a good idea to attend.

She said she went with her second cousin and one of her cousin’s friends.

They arrived right before the rally started at noon.

Vogt-Erickson said there were many reasons she attended the event.

“In a democracy, a leader has to govern on the basis of facts,” she said.

She said she is concerned with Trump’s promise in his inaugural speech to shift power to the people when at the same time, she believes he has been nontransparent, surrounded by the wealthy and has cut off the press.

“As far as draining the swamp, or returning the power to the people, it’s not happening,” she said.

She noted she is concerned about addressing climate change, women’s rights and human rights.

Though they only participated in the rally, Vogt-Erickson said she felt uplifted by being in attendance and was astonished by the crowd.

“It felt pretty empowering seeing all these people out,” she said. “It made me feel a lot more positive.”

“I work with a lot of children of color, and the day after the election, I had to go back to school and explain to my children that they don’t need to be scared. And I couldn’t explain what had happened. And they had a lot of questions. They were very scared,” Hagen said.

Kathy Chinn, 50, of St. Paul, brought her two daughters, her mother and mother-in-law to the Minnesota Women’s March. She said the Republican president does not represent her family’s values.

“I feel that respect for women and immigrants and everything that immigrants bring to our country in particular is not being represented by his views,” Chinn said.

“You are the powerful,” Omar, a Minneapolis Democrat, said at the rally. “We don’t live in a dictatorship. We live in a democracy.”

Police made only one arrest, a male counter-protester who marchers said sprayed a chemical irritant into the crowd. The man was booked into jail for aggravated assault.