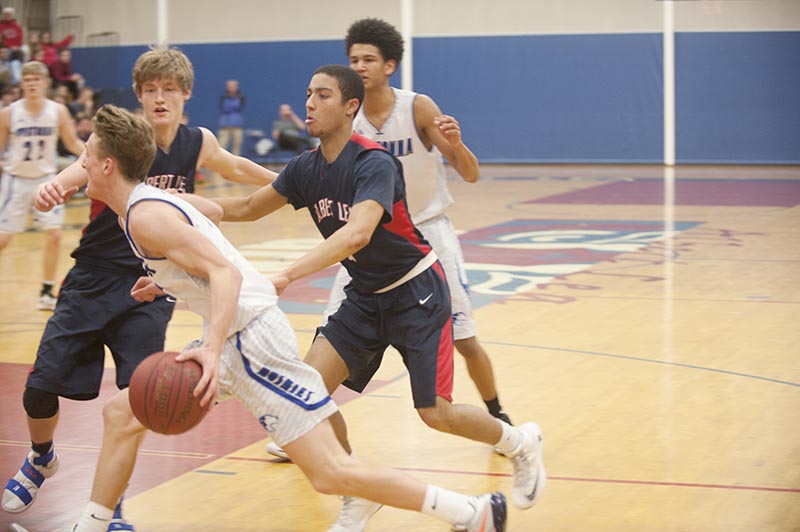 Albert Lea’s Josh Forde (right) and Jack Buendorf look to cut off Owatonna’s Jay Sullivan on his way to the hoop during the second half of Friday’s game in Albert Lea. Jarrod Peterson/Albert Lea Tribune

It didn’t take long Friday night for the Owatonna boys’ basketball team to show why it was one of the hottest teams in the Big Nine Conference. Albert Lea was hoping to stop the Huskies’ momentum and earn its first win of the season in the process.

Albert Lea, like it has all season, played hard and never gave up. But the effort wasn’t good enough as the Huskies came away with a 78-42 win.

The Tigers defense held the Huskies to below 40 percent shooting in the first half, but turned the ball over 20 times in the half. The turnovers proved costly as Owatonna finally found its rhythm on offense and took a 38-17 lead into the locker room.

Albert Lea’s Tanner Wichmann drilled a three-pointer to start the second half, but that was about all the momentum the Tigers would get in the half as the Huskies continually turned over Albert Lea and attacked the basket with an unrelenting will one would see in a UFC fight.

Wichmann provided fans and his teammates with a highlight moment, though, and maybe it will be some momentum Albert Lea can carry into its next game. With just seconds left on the clock, Albert Lea inbounded the ball. It got deflected and Wichmann picked it up around halfcourt and buried a 40-footer as time expired.

The loss kept the Tigers winless on the season and they are now (0-10) in Big Nine Conference play.

Albert Lea will travel to Rochester to play Century on Tuesday evening.