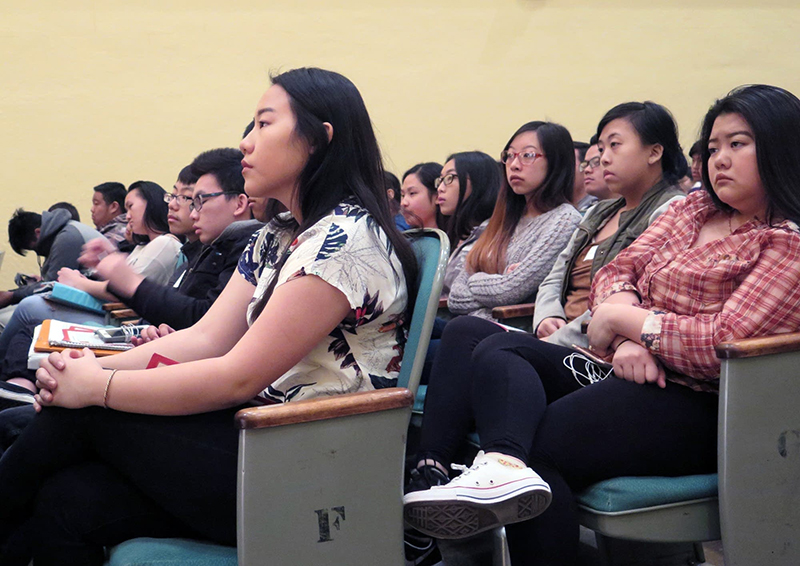 Hmong American students at Patrick Henry High School listen to guest speakers talk about their challenges in their careers during the school’s annual event called “Success That Looks Like Me” on Thursday. - Doualy Xaykaothao/MPR News

Sixteen-year-old Catalina Yang said for much of her life she ha s been looked down on and made fun of by people in the Twin Cities.

“They’d be saying ‘ching chong, do like the squinty eyes.’ I might speak a different language, but I speak English too,” she said.

Sometimes, people mistake her for a foreigner instead of a local. And at school, if math doesn’t come naturally, or if writing is a challenge, she’s ridiculed.

On Thursday, Yang was one of hundreds of Hmong-American students who packed the Patrick Henry High School gym in Minneapolis Thursday to learn about Hmong professionals in the Twin Cities at an all-day event called “Success That Looks Like Me.”

It was a kind of career day in which students could meet and greet Hmong-American professionals.

“I want to be closer to Hmong people, because lately, people have been telling me that Hmong don’t love Hmong,” she said. “I’m just like, ‘We can love each other if we keep trying.’ We’ll have a stronger bond than anybody else.”

Peterson is white, and grew up in Hopkins.

“And I saw a lot of examples of white people who were successful, from political office to entertainment, and I know what that meant for me,” he said. “I know I was able to relate to the backgrounds that they came from. And I want that same thing for all of our students.”

Patrick Henry principal Yusuf Abdullah talked about learning from those who have come before.

“As young Hmong kids there are a lot of stories that are told about us, a lot of myths, that we can’t accomplish much,” she said. “I want the students to know that they have an option to set their own path, to set their own goals … to really believe in themselves.”

Moua has a new book out called “The Bride Price: A Hmong Wedding Story,” published by the Minnesota Historical Society.

“I want them to give themselves the opportunity to go to college, to explore who they really are, and to grow outside of their family, to expand their horizons…to see the world as a big place,” she said. “There are mentors, they are not alone.” Senior Soda Thao has heard the message. He’s 18, and says he’s charged and ready. He wants to become a police officer. “You can be anything you want,” he said.