Priest grateful for advances in country; still a long way to go 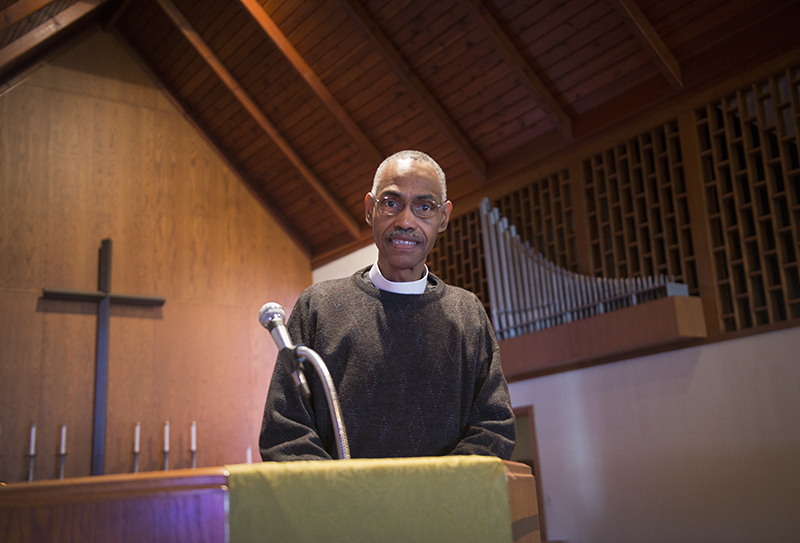 From Henry Doyle’s point of view, unity, acceptance and kindness are some of what’s needed to heal a divided nation.

Doyle, 65, has been the priest in charge at Christ Episcopal Church in Albert Lea since fall 2012. He leads three Sunday services each month, or four during months that have five Sundays. He also runs a confirmation program through the church and visits homebound and hospitalized parishioners, in addition to presiding over funerals, weddings and baptisms.

He commutes from Faribault, where he works in alumni affairs and outreach at Shattuck-St. Mary’s School, an Episcopal-affiliated boarding and college prep school. He was previously the chaplain at the school for over 20 years.

Doyle, originally from Colorado Springs, Colorado, grew up attending church services regularly. Early on, when he was around 11 or 12 years old, Doyle said he wanted to be a priest.

“Then I thought that wasn’t right, because priests were perfect, and I was not a perfect child,” he said.

Doyle went to college, before joining the Peace Corps following graduation. He went to Ethiopia to teach English as a second language, although for most of his students, English was their third language. After his time in the Peace Corps, Doyle traveled around other parts of Africa and throughout Europe before returning to the United States. He then worked in banking before going to Colorado State University to obtain his master’s degree in education, after which he worked in housing at the university.

Doyle said his church attendance dwindled and was sporadic during his early college years, and that it wasn’t until he was in graduate school that he felt something was missing. He said he realized that he missed the faith-based community he had grown up in, and started to regularly attend Sunday services at the local Episcopal church.

“It was good to get back into that routine,” he said.

After getting back into attending church, Doyle said he began to start feeling “the call” to be a priest once again, and got more involved in his church through serving on the parish council. After he finished grad school, he talked to his parish priest, who eventually helped refer him to Nashotah House Seminary in Wisconsin. After receiving his master’s in divinity from the seminary, he got his job as chaplain at Shattuck-St. Mary’s.

Doyle has been involved with his local community in Faribault through volunteering for Meals on Wheels and working with various nonprofit organizations, and has also participated in area theater productions. He also has a card ministry, which involves him sending out thousands of cards each year to celebrate birthdays, holidays and other celebrations.

Doyle said he is no stranger to hard work, and that his parents raised him and his four siblings in that image. A typical day for Doyle starts at 2:30 a.m. and ends around 11:30 p.m., meaning he gets about three hours of sleep each night. He tries to get a power nap in before dinner most days, he said.

While he has an apartment in town in case he ever needs to stay overnight, Doyle typically comes to Albert Lea one additional day each week, on top of his Sunday services.

Doyle said the community of Albert Lea has been welcoming, but he worries about the future of the parish with it lacking younger members. He said that’s something the parish is looking to branch out on more and that it hopes to welcome younger families into its congregation.

Out of about 64 total congregation members, Doyle said he usually has around a dozen regulars for Sunday services.

“We need to grow,” he said. “But it’s a joy and a privilege for me to serve this congregation.”

Doyle said that the congregation is close-knit, and that it freely talks about various issues, including current events that have stemmed from the recent presidential election.

Growing up during the era of the Civil Rights Movement, Doyle said his family was usually the only black family in church. He said that while there was clearly segregation and there were some places he knew he wasn’t welcome because of the color of his skin, Doyle was never afraid to be the only black person in a crowd or in a room.

While Doyle said he considers himself to be conservative and a Republican, he hasn’t voted for a Republican in years. The election of President Donald Trump worries Doyle, as he said Trump’s habits of putting people down based on their race, gender or sexual orientation makes Doyle fear Trump will “roll back the advances we’ve made and the advances our ancestors fought for.”

Doyle said he is not sure there will ever be total equality in the fullest extent of the word for everyone, but he hopes there will be a time when people aren’t discriminating against others out of their own ignorance.

“It’s wonderful today that we have made a lot of advances, but we still have a long way to go,” he said.

Doyle said the advances that have been made are clear even in Albert Lea. An example he gave was that there’d be no way he’d be leading a congregation in southern Minnesota 50 or even 40 years ago, unless it was a predominantly African-American church in a more diverse area.

“One month is not enough,” he said. “The historical texts need to reflect the history of the people here.”

In times of national turmoil, Doyle said he often refers to the prayer of St. Francis of Assisi — which he prays every morning — and specifically the line, “Where there is hatred, let me sow love.” He said people need to respect the dignity of every human being, and should not be enemies because of things like gender, race, religion or sexual orientation.

“I do first and foremost identify as an American, and then I’ll say I’m a black American,” he said. “I don’t use the term African-American because I feel more rooted here, in America. I was born here.”