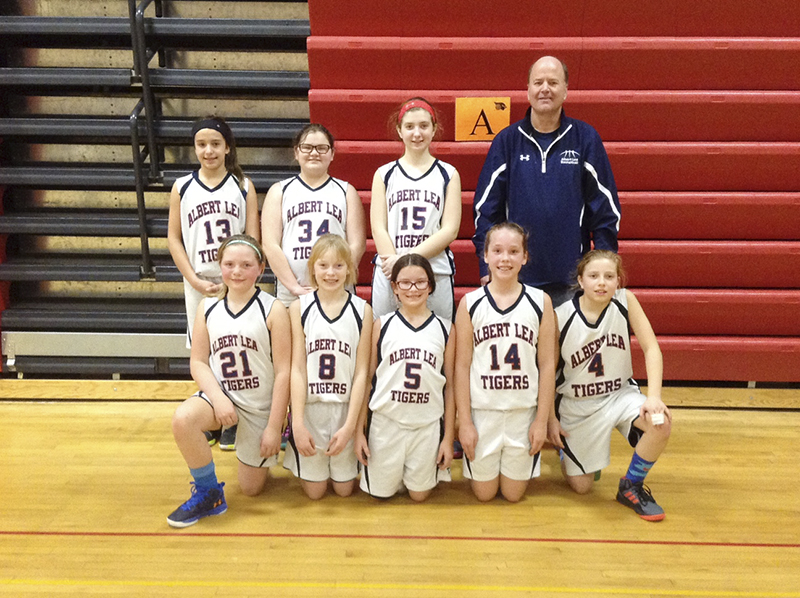 The Albert Lea fifth-grade girls’ traveling basketball team captured the consolation championship in the Fairmont tournament on Feb. 19. It defeated Maple River 23-16 and lost to Worthington 25-13, before bouncing back to defeat Martin County West 36-31 and Marshall 19-18 to capture the consolation title. Pictured in the front row are Lily Hyke, Jessica Vogt, Alexis Jones, Phoebe Holst and Elizabeth Wallace. In the back row are Kayla Johnson, Alex Funk, Jaylee Waters and coach Tom Jones. - Provided

The Albert Lea fifth-grade girls’ traveling basketball team recently completed its season with a record of nine wins and 10 losses, according to a press release.

The team captured consolation championships in its final two tournaments of the year in Alden-Conger and Fairmont.

“The highlight of our season was winning five of our last six games, including a buzzer-beater in the consolation game at the Alden-Conger tournament,” coach Tom Jones said. “We worked so hard the first two months of the season on basic fundaments, and it was fun to see the fruits of their efforts in our last two tournaments.”

Jones said the team featured six girls who were new to traveling basketball and he hopes the fun they had will help bring more members to the squad next year.

“These girls were a joy to spend three months with teaching them the game,” he said. “I look forward to continue coaching them and watching them grow to become future Tigers.”