Albert served in the United States Army Air Force during World War II as a navigator on a B-17 Bomber stationed in Italy. He was proud to have served his country and in 2010 had the privilege to visit the memorial sites in and near Washington D.C. by the Honor Flight organization. 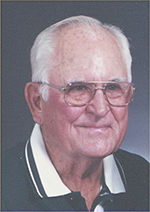 Albert was married to his wife, Naomi Sloan, for 68 years. He worked for Benson Optical for a total of 39 years, beginning in Albert Lea before transferring to Salt Lake City in 1978. He then retired to Arizona in 1987. He enjoyed spending time with family, fishing, hunting, snowmobiling and golf.

Inurnment will be scheduled at a later date at Geneva Cemetery.