‘I would have never made it without my family’ 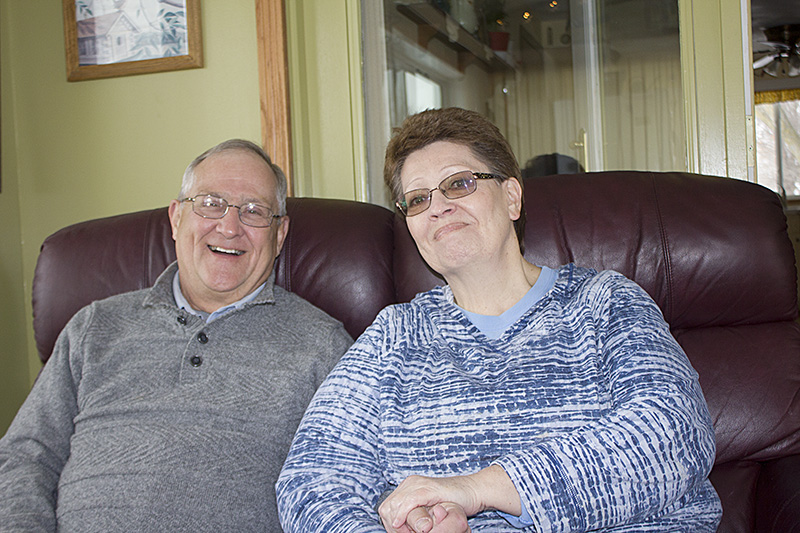 Lynn Berven is a breast cancer survivor, and he credits his family, including his wife, Jan, for helping him out through the process. — Sam Wilmes/Albert Lea Tribune

Six rounds of chemotherapy. Nearly three dozen radiations. For an Albert Lea man who is a breast cancer survivor, overcoming those obstacles was made easier with the help of family, friends and faith.

“I remember that day, because (the doctor) came back and said it was cancer,” he said.

“But even after I got it, after I was taking the chemo and losing my hair, people would ask me ‘What kind of cancer you got?’ and I would say breast cancer,” he said. “‘Well, guys can’t get it.’ Well, tell my doctor then.”

Berven’s first chemotherapy treatment took 6 1/2 hours after he experienced an allergic reaction, during which he could not talk or move his arms and legs and his blood pressure dropped to 80 over 50.

Three dots remain on his chest where he received radiation, a treatment that burned him and made him tired. He would sleep for three to four hours each day in addition to sleeping all night.

Berven, who was 59 when he was diagnosed, remembered his mother, who died of breast cancer at age 59.

“All of these things are going through your mind, of what she had to go through,” he said.

Berven said he was inspired to fight after speaking with the Rev. Al Stoa and his doctor, Jeffrey Lotts.

“We just talked about it, and then I talked to my surgeon, Dr. Lotts, and I just decided this thing ain’t going to get me,” he said. “I made the decision there, and ever since then it’s just been … full speed ahead.”

Berven, who has been in remission since 2015, meets with a cancer support group at Mayo Clinic Health System in Albert Lea the last Monday of each month, and he enjoys helping others fight cancer.

“You have changes in your body when you go through something like that, and it’s kind of nice to talk to somebody that has been there, and they can tell you, ‘yeah, that’s normal. What you are going through is normal.’”

Berven tells survivors that they have an obligation to encourage others who are battling cancer, and he tries to recruit people to the group.

Berven, a part-time employee at Bonnerup Funeral Service and hauled rural mail out of Glenville for 30 years before retiring at 55, has worked part time for Advance Auto Parts and Hy-Vee.

Breast cancer is far less likely to occur with men than with women, Berven said.

“A lot of the times when guys get it, they don’t believe they can get it, so by the time it is diagnosed, it is usually Stage 4,” he said.

Berven faced a PET scan Feb. 1, and genetic testing is planned for April.

Berven and his wife, Jan, have two children: Bart and Sari; and four grandchildren: Hannah, Ashlyn, Aubri and Macy.

“I would have never made it without my family,” Lynn Berven said. “When I first found out I had cancer … I knew my wife would be fine. I knew my kids would be fine, but I worried about my grandchildren, my grandbabies, and I thought, ‘Are they going to forget me?’

“My two grandchildren that I had at the time … I am not a touchy, feely guy, but I wanted one of them sitting by me all of the time. They just held my hand. Family and faith and friends. I don’t know how people get by without them.”

Berven’s cancer diagnosis has not kept him from continuing to be active in the community. Berven is a member of the Eagles Club. He is a Mason and a Shriner and drives Shrine cars during local parades. He has also acted in several plays, sang with a band and sang karaoke.

“I’m very optimistic that I am going to be around for a long time, and I’d like to be involved in a lot of different things,” he said.