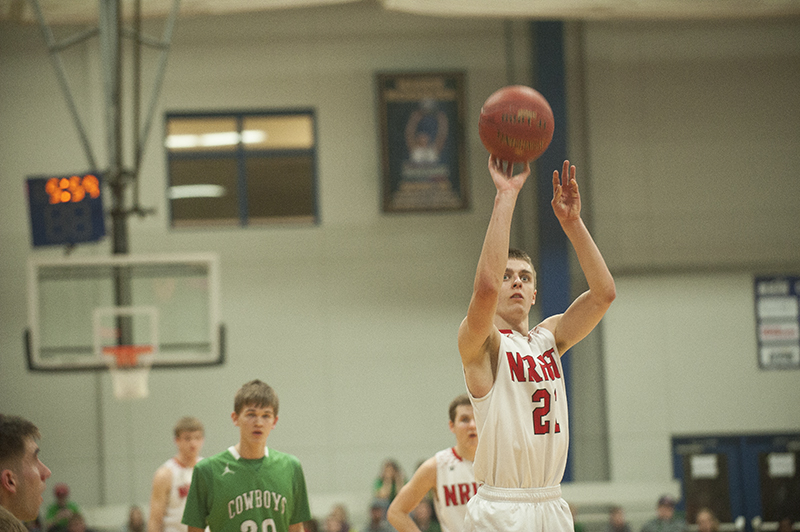 Panthers forward Oakley Baker shoots a free throw in the second half on Thursday. He led NRHEG with 22 points. - Jarrod Peterson/Albert Lea Tribune

ST. PAUL — The NRHEG boys’ basketball team suffered a heart-breaking loss in the quarterfinals on Wednesday.

After having all day to contemplate that loss, the Panthers took on the Breckenridge Cowboys with a spot in the consolation championship on the line Thursday night.

One of the worries for the Panthers could have been a physical lapse early in the game, but head coach Pat Churchill was pleased with what happened.

“There was a little worry that we would have a letdown or if they were motivated to play this game,” Churchill said. “But we have a bunch of kids that really wanted to enjoy the experience of coming up here. Coming out and getting a victory is something our kids wanted.”

NRHEG used a great defensive first half and carried it into the second half as it won going away, 65-47.

The Panthers came out with a lot of defensive fire, holding Breckenridge to four points through the first nine minutes of the first half.

Jason Jongbloedt and Oakley Baker sparked the offense for the Panthers, as Baker had 10 and Jongbloedt finished with eight.

Tyler Raimann started the game with a big block on the defensive end that translated into two points from Chad Agrimson on a short jumper. 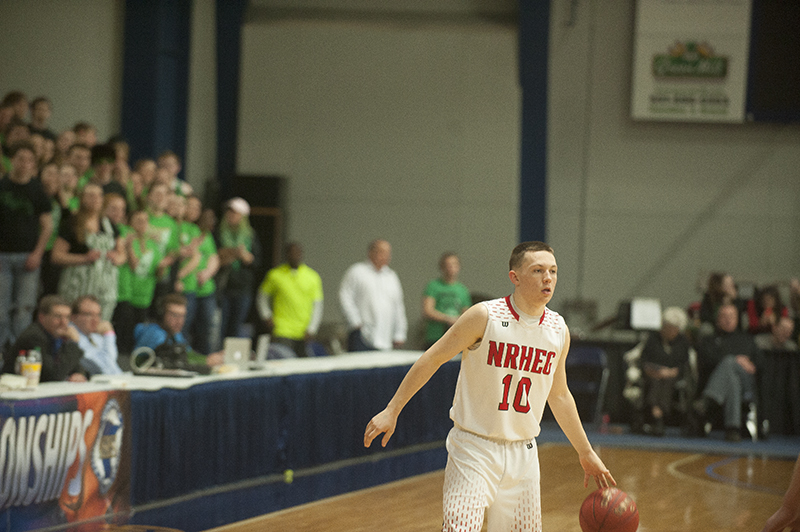 NRHEG’s Sam Prigge looks for a teammate to pass to the ball to in the second half. – Jarrod Peterson/Albert Lea Tribune

Breckenridge would briefly tie the game on a layup from Stevin Lipp.

But it was mostly all NRHEG after that.

Benji Lundberg came off the bench and dribbled the length of the floor for a layup. Seconds later, Raimann stole the ball at half court and took it in for the slam to put the Panthers up 6-2.

A three-point-play by Baker extended the lead to seven points.

The lead would continue to build for NRHEG, as Jongbloedt hit back-to-back three-pointers to make it 15-4.

Meanwhile, the Cowboys had a tough time making layups, let alone jumpers, as they missed several shots around the basket on their way to shooting 8-28 (28.6 percent) in the first half.

But Breckenridge would get its offense going toward the end of the half. Down 18-8, Noah Christensen had a three-point-play, then Lipp scored his second hoop of the game, forcing Churchill to call a timeout. Christensen would score on another layup, then the Cowboys hit their first shot outside of the paint on a three-pointer from Sam Bakken. Christensen add another hoop that capped of a 12-4 run for Breckenridge.

The Panthers would get the last laugh as they ended the half on a 9-2 run to take an 11-point lead into the locker room.

For how slow the Cowboys started the first half, they picked it up to start the second half. Breckenridge scored five points in the first minute to cut NRHEG’s lead to six points.

The rally would be short-lived.

Raimann scored on a nice pass from Prigge, then Baker drilled a three-pointer from the right wing. That would be the start of 10-2 run that would put the Panthers in cruise control.

NRHEG would grow to the lead to as much as 18 points late in the second half.

“We hung our hats on our defense all season, and there was no reason to change that,” Churchill said. “(Breckenridge) is a tremendously good offensive team, and our kids knew that. We stepped up.”

Baker led all scorers with 22 points. Jongbloedt finished with 12 points.

Breckenridge was led by Christensen with 15 and Lipp with 14.

NRHEG held Breckenridge to 33.9 percent shooting from the field and forced 14 turnovers. The Panthers had eight steals.

Breckenridge came into Thursday’s game being held under 50 points only two times this season. The Cowboys were 0-2 in those games. NRHEG dropped them to 0-3 when scoring less than 50 points.

NRHEG will take on Lake City in the consolation championship at 2 p.m. Friday at Concordia University-St. Paul.