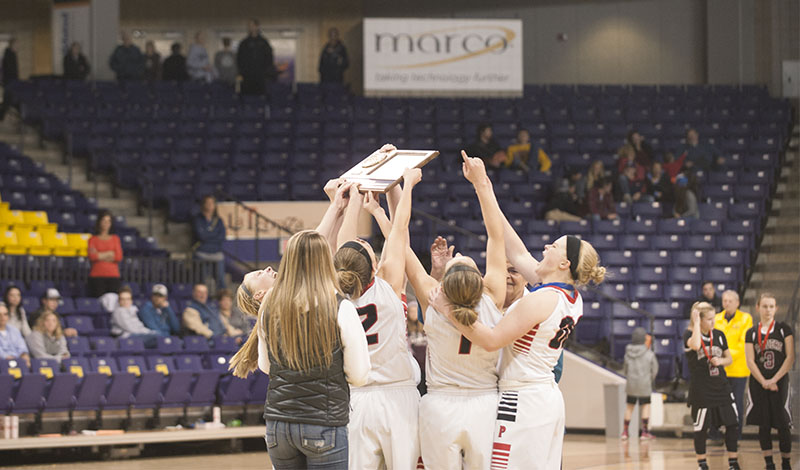 MANKATO — A year after losing to Norwood-Young America (28-2) in the section finals, the NRHEG (25-5) girls’ basketball team got revenge in Friday’s section final with a trip to the state tournament on the line.

The Panthers used a huge second half from Betsy Schoenrock and Marnie Wagner to top the Raiders, 53-45.

NRHEG got 19 points apiece from Marnie Wagner and Schoenrock in the win.

Basketball is a game of runs, and the first run of the game didn’t go to the Panthers. NRHEG couldn’t have gotten off to a worse start in the opening minutes. The Panthers couldn’t connect on passes, hit the rim on shots or stop the Raiders. Those three things allowed NYA to jump out to a 13-2 lead halfway through the first half. NYA’s Bren Fox scored on a hoop inside to give her team a 15-2 lead.

But the Panthers would respond, thanks in large part to Marnie Wagner, who scored seven of her 10 first-half points in the final five minutes. First, she snapped the Panthers’ 10-minute cold spell from the field by draining a three-pointer. Moments later, she converted on a short baseline jumper off an offensive rebound by Kelly Harden. That hoop made the score 17-8. 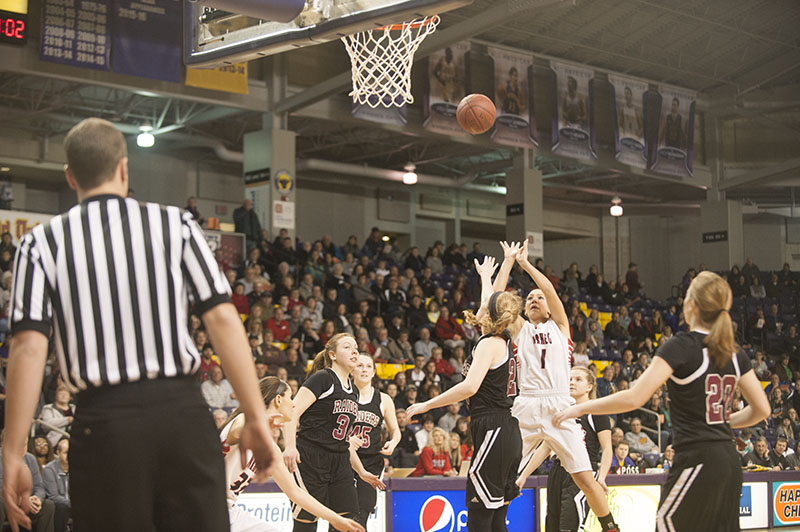 NRHEG’s Maddie Wagner releases a shot over the outstretched arms of NYA’s Bren Fox in the first half Friday night.

The Raiders’ Kali Grimm would respond with a three-pointer from the left wing. However, it would be the Panthers who would get the last laugh in the first half. Down 20-10 with 3:41 left, NRHEG got two free throws from Grace Johns, an inside bucket from Schoenrock, then Marnie Wagner buried another triple off an assist from Harden.

On the ensuing defensive possession, she stepped in the passing lane for the steal and took it down the court for two more points and helped the Panthers close the half on a 7-2 and the gap from 10 points to five points, 22-17.

The second half would belong to Schoenrock and the Panthers. After Kayley Camerer buried a three-pointer from the corner, Schoenrock gobbled up an offensive rebound and laid it back in for two to pull NRHEG to within two points.

Maddie Wagner would answer an NYA basket with one of her own, then Schoenrock grabbed another offensive rebound, went up strong, made the basket and was fouled in the process. After the made free throw, the Panthers had their first lead of the game at 27-26.

The Raiders would take back the lead with two free throws, but a NRHEG missed shot was snagged by Schoenrock who put it back in.

Bren Fox would score four straight points for the Raiders to give them a 32-29 lead, but it was short-lived as Johns swished a three. Schoenrock came up with a blocked shot on the next possession, then Marnie Wagner drained a three-pointer to put the Panthers up 35-32.

On the next offensive possession, the momentum shifted fully in NRHEG’s favor. Schoenrock pulled down another offensive rebound and finished through the contact. The effort brought the NRHEG crowd to its feet. The made foul shot made it 38-32.

NYA was never able to recover.

Later in the half, Marnie Wagner drove to the hoop and dropped it off to Schoenrock for two more points. With every hoop, the Panthers felt they had the game more in-hand. Up 44-38 with 6:52 left, Marnie Wagner let a three-pointer fly. It swished through the net to give the Panthers a nine-point lead.

The Raiders would make one final push.

Abby Mackenthun connected on a three-pointer, then Fox got loose inside for two points. That cut the Panthers’ lead to four points. NYA had a chance to inch even closer with under five minutes to play, but Mackenthun missed the front end of the one-and-one. 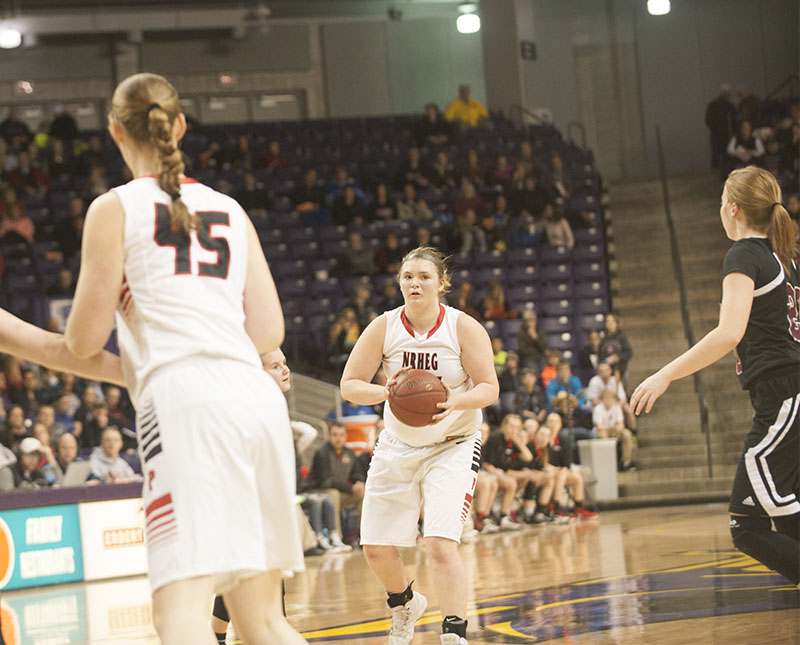 NRHEG’s Kayley Camerer looks for a teammate to pass the ball to in the first half Friday night.

The Raiders would never get any closer as the Panthers hit six of eight free throws to end the game.

NRHEG will play a quarterfinal game at Mariucci Arena, on the campus of the University of Minnesota, on Wednesday.

Its opponent and start time have not been released.