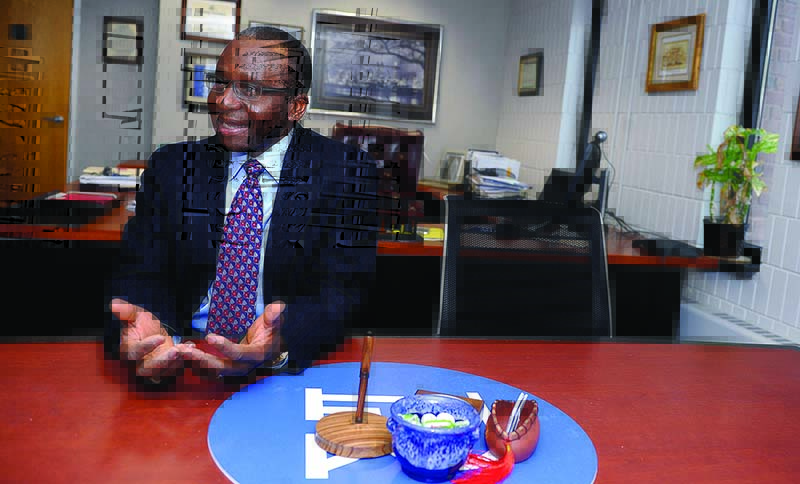 Riverland Community College’s President Adenuga Atewologun always thought that his career lay in designing and engineering farm structures, such as those used in feed storage and operations.

While his work in design gave way to a bigger love — that of educating young minds — his interest in agriculture, combined with a career that took him to the fertile fields of southeastern Minnesota, helped fuel a new vision for Riverland students.

“When I came to this agricultural area, I thought it was wonderful,” mused Atewologun, reflecting on his journey. “This area of Minnesota — and Wisconsin, Iowa — I immediately thought, ‘Why don’t we have a program in ag science?’”

“In terms of agronomy, technology, I didn’t see any of these things here (at Riverland),” he added.

Those first impressions provided a key step in what has grown into an enhanced journey. Riverland’s ag curriculum has been remolded to include ag sciences, food science technology, biotechnology, precision ag and agribusiness; its farm business management program is one of the college’s most popular programs, Atewologun said.

But the best may be yet to come.

Today, Riverland is working toward establishing, in partnership with The Hormel Foundation and the Southeastern Minnesota Center for Agriculture and Food Science Innovation, a global center with state-of-the-art instruction and study in the areas of food science, farming and bioenergy. The center would not only be a place for students to learn, but where a partnership of professionals, working farmers and others would work together to address challenges in the agriculture industry.

Atewologun has always held a love of both agriculture and its engineering component. He earned his undergraduate degree in ag engineering in his home country of Nigeria, at the University of Ife. 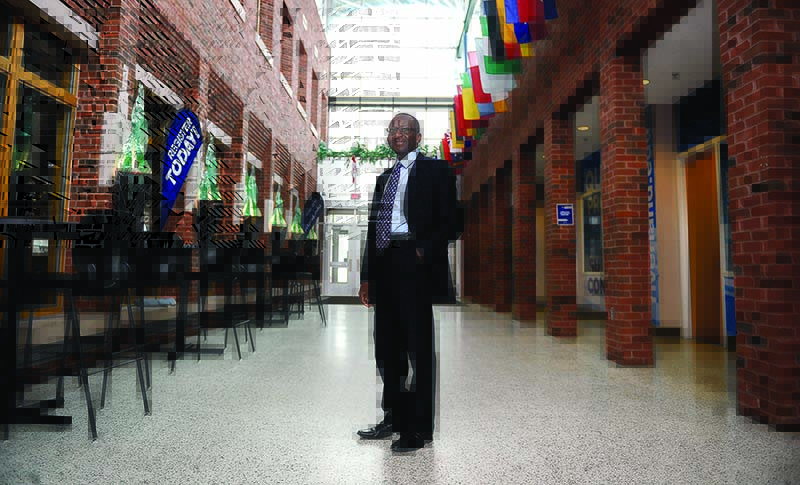 “I was bent on research,” he recalled, adding he traveled to the U.S. because some of the best graduate schools were in the U.S. He ended up entering his master’s program at the University of Illinois-Urbana-Champaign. He stayed seven years, finishing his doctorate program whose focus was on how to improve the formula for tall grain bin structures. While that may sound relatively simple, it is complex: the taller and larger the bins, the more challenges there are in its construction that relates to moisture content and safety of its walls when loading and unloading.

After he received his doctorate, his plan was to work in the U.S. for two years and then return to Africa. Before he came to the U.S., he had formed a company with friends that would focus on the manufacture of livestock feed.

“The plan was to work on my post-doctorate, get more experience … and then return to Ife as an engineer in the area of food and agriculture,” and working in the company, he said.

“But life turns, you know?” he said with a chuckle.

But sustaining an income in the midst of study — and supporting a family — became increasingly difficult. While finishing his dissertation, he took an adjunct position at the college to teach statics, technical graphics and land surveying.

Surprisingly, he said, “I was having fun — a different kind of fun.”

He was energized by the students. He applied to be a full-time instructor at a community college and he found himself hooked on the classroom.

One valuable lesson he learned was the difference between the traditionally young student, fresh out of high school, and the non-traditional student, who may be entering classes for the first time, or is changing a career. He found that “college readiness” was far different between the two groups.

The experience taught him several things, but among the most important, he said, was “that in America, [these type of students] can have second or third chances to change their lives, tremendously. I wanted to contribute to those students.”

His plans for the future — and a return to Africa — had profoundly changed. From then on, he followed a path to teaching, and then, administration. A series of positions offered — from instructor to department head, assistant dean to dean — kept him in Illinois; and then in 2008, he served as an American Council on Education Fellow at Bellevue College in Washington state. In 2009, he returned to Illinois to take up positions of vice president, academic affairs and dean of faculty at Prairie State College in Chicago Heights until 2013, when he came to Minnesota as the head of Riverland.

In his first year as president, Atewologun and staff identified agriculture as a top priority with its “Blueprint for Excellence,” which outlined Riverland as the hub for ag instruction in the region.

Atewologun recognized immediately that progress toward a center of ag excellence would come with partners and Austin had one of the best: The Hormel Foundation. Just a year after he arrived, the first Ag Summit, held in conjunction with the Foundation and held at The Hormel Institute, brought together producers, business and educators to discuss and learn about agricultural ventures and challenges.

Subsequent summits have been held each year since. The summits, which focus on a theme each year, bring together producers, business and educators to discuss and learn about possible agricultural ventures.

In 2015, The Hormel Foundation announced a $263,200 grant to Riverland to help launch the Center for Agriculture and Food Science, an agriculture technology “center of excellence” at the college in Austin that helped provide another partnership — this time with both Minnesota State University at Mankato, and Southwest Minnesota State University, to provide four-year agricultural degrees. Mankato would be the partner in the food science technology, biotechnology and agricultural science programs, while Southwest would provide the last two years of programming for agronomy and ag teacher education.

In November, Riverland signed on as a partner of the Southern Minnesota Center of Agriculture, a collaborative group of regional higher education institutions with related ag programs. The center, which focuses on connecting students with resources and programs of academic institutions, also works to establish partnerships with key businesses and organizations in the industry to meet the demands of manpower. Others that have joined the center are Minnesota West, Southwest Minnesota State University and South Central College in Faribault and North Mankato, the lead institution for the center.

The next step may be the most daunting: the creation of the global center itself, which includes an estimated $11.5 million capital project, a venture that will bring one of Riverland’s most important partnerships — the state of Minnesota — into the plan. Much will depend on inclusion of a portion in the state’s bonding bill, whose outcome remains to be known.

But funding is not the biggest challenge; the first, and perhaps the most difficult, is attracting a younger generation to the agriculture sector.

“So many think of agriculture as just production, hard labor, dirty,” he said. “But it is the soil scientist, the seed scientist, the financier, food science, the engineer … managing our environment, all these jobs are related to the agriculture industry. Look here in Austin, Hormel Foods, a Fortune 500 company! And yet, convincing our younger generation of the needs in ag science, I think this is our first challenge and, I think, the most difficult.”

Another is attracting “teachers who are passionate, who can inspire” the students. Riverland is very fortunate, he added, with its agriculture instructor, Willie Mekeel, “who is wonderful” for the program.

Finding the needed finances, he added, is next — but not by any means, the most important.

Because, if Atewologun knows anything, it is that life is filled with the stuff of new beginnings and unexpected turns.

And, he added, “if the idea is marvelous and innovative, you will attract funds to get the job done, of that I am convinced.”