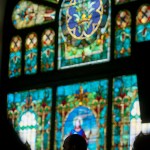 Hay Tha, a United States citizen who originally came to the U.S. as a regufee from Thailand, leads a prayer during a Karen worship service at the former First Baptist Church in Albert Lea. – Colleen Harrison/Albert Lea Tribune 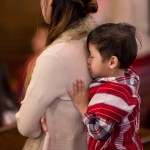 The local Karen community has two separate Sunday schools — one for younger preschool-age children and another for elementary school children. The Sunday school classes break to attend the weekly worship service before going back to school. – Colleen Harrison/Albert Lea Tribune 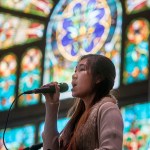 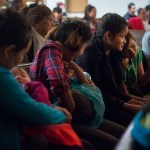 The area Karen community has been renting the former First Baptist Church in Albert Lea for about one year. The group previously worshipped inside of a trailer in Stoney Creek Estates. – Colleen Harrison/Albert Lea Tribune 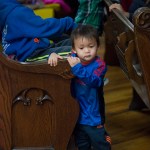 Karen people have been fighting for independence from Burma for more than 60 years. Since 1962, Burma has been a military dictatorship. The military has reportedly tortured, raped and killed thousands of Karen people. Many died under conditions of forced labor and month-long walks to refugee camps. In 1989, Burma was renamed Myanmar, but because of the name’s negative military overtones, most minority ethnic groups — like the Karen — refuse to use the new name.

Many of the Karen have been displaced to refugee camps in Thailand over the years and still today, where there are limited sources of food and clean drinking water, and where safety is not always guaranteed. Many have come to the United States as refugees, and some 4,000 Karen refugees now live in Minnesota.

Initially, the local Karen population had its Sunday worship services in a trailer inside of the Stoney Creek Estates trailer park. The group has since sold that trailer and is now renting space in the former First Baptist Church on Clark Street in Albert Lea. The group has rented space in the church for about one year, and pays for the rental from a group fund that each of the families in the group pay into monthly.

The church services are led differently each week. One week elders lead the service. Another week could be led by the women’s group of the church or by one of the Sunday school classes. Music plays an integral role in the service, with guitars, drums and piano often being used throughout. There are typically 60 to 80 people at the service each week, with some coming from as far as the Twin Cities to worship.