A celebration of life service will be at 11 a.m. Saturday at Zumbro Lutheran Church, 624 Third Ave. SW in Rochester. The Rev. Vern Christopherson will officiate. A private columbarium ceremony will precede the visitation at 9:30 a.m. 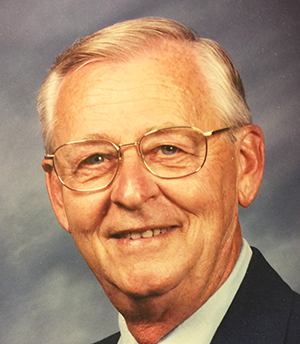 Bob was born in Menno, South Dakota, the eldest of eight children to Alvert and Lois on Sept. 11, 1934. He was baptized and confirmed at Peace Reformed Church. He attended rural school and graduated from Garner High School in 1952. After serving in the United States Army, he married Helen Jean Baggs on Sept. 14, 1957.

He worked for several companies in a variety of capacities in Albert Lea and Rochester, including metal fabrication, insurance sales and retail. He also worked as a district sales representative for Clark Oil. A highlight in his career was his venture owning the Streyle Merchantree. Bob also served as a Stephen minister and president of Hosanna Lutheran Church. He was a member of the Kiwanis Club in Rochester. His faith journey included active involvement with Zumbro Lutheran Church and community Bible study.

Spending time at his cabin in Stone Lake, Wisconsin, with family and friends brought him great joy.

In lieu of flowers, the family requests that memorials be given to Mayo Clinic Cancer Research Center or Zumbro Lutheran Church Choir.