Walters bar has a new owner and new name 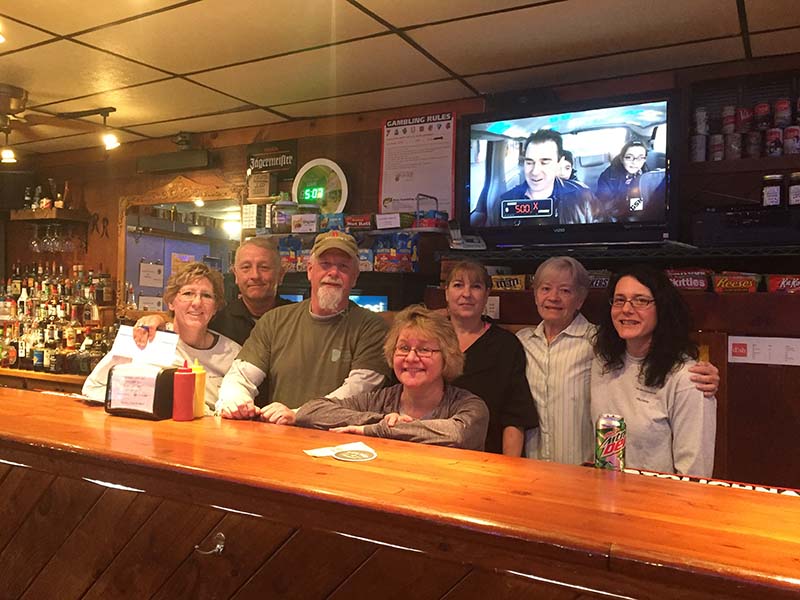 Jim Buckley, third from the left, purchased the former R & R Roadhouse Bar and Grill in January. Many of his staff members have stayed through the transition to Buckley’s Bar and Grill. - Kelly Wassenberg/Albert Lea Tribune

WALTERS — When most people say they are headed to a town, there may be a question about where exactly they’re going. But for many area residents, the mere mention of Walters means one thing — you’re headed to the town bar.

That was the way it was when R & R Roadhouse Bar and Grill was under the ownership of Tony and Patty Adams. The establishment’s new owner, Jim Buckley, is the first to admit that might not change despite the name change to Buckley’s Bar and Grill.

“We actually considered calling it Walters Bar and Grill for that very reason,” Buckley said of him and his wife, Barb’s, debate over the name. “Because that’s what we would say. We still say it now.”

The couple frequented the bar a few times a week before approaching the former owners about buying the business.

“We just really liked the place and the customers so when we bought the place our goal was not to mess anything up, because it was an established business.”

Buckley credits the Adamses for insuring there was a smooth transition in ownership by showing them the ropes. It was a much appreciated gesture as the Buckleys were new to the restaurant business.

Buckley, a New York native, started his career on the New York Stock Exchange before moving into banking operations and eventually marketing. He worked in a national sales position, marketing software to banks, brokerage houses and insurance companies before deciding to move from the home he had in Florida to Minnesota five years ago.

“We could have lived anywhere in the United States, but we choose Walters,” Buckley said. “People kind of laugh at that, but I love this town.”

The decision was made in part because his wife wanted to be closer to her family in Alden. As they looked to find a home of their own, they found an acreage five miles outside of Walters and settled in.

Barb Buckley still works from home as a project manager for a financial services company, and at the time Jim Buckley was still working in the sales field, but on a more regional level.

That all changed when he said he lost his passion for his work. He has found it once again and is focusing that passion on the success of his new venture.

He said he wants to build on what the Adamses established and believes the skillset him and his wife  obtained through their work experiences may be able to take the bar to the next level.

A few minor changes have been implemented by the Buckleys. New signage adorns the front of the building and the tables and chairs have been replaced. Some of the old branding has been removed while some remains as what Buckley calls “architectural history.”

A few menu changes have been made, including the addition of a Tuesday ribs night while the tradition of Wednesday burger nights and Thursday steak nights continue. Lunch specials are available daily and posted on the business’ Facebook page. Buckley is also planning to utilize the back patio area more and periodically bring in live entertainment.

His first and foremost concern, however, is maintaining the atmosphere that he fell in love with as a customer.

He believes that it is his responsibility to ensure his customers consistently receive good food and customer service in a friendly environment.

The kitchen at Buckley’s Bar and Grill is open from 11 a.m. to 9 p.m. Monday through Saturday, with a grill menu featured on Thursdays. The bar is open until at least 10 p.m. on weekdays and midnight on weekends.