A celebration of life for Betty J. Ruud, 91, of Albert Lea will be at 11 a.m. Tuesday at First Lutheran Church in Albert Lea. The Revs. John Holt and Sean Forde will officiate. Interment will be at 9:45 a.m.  Tuesday at Graceland Cemetery. Visitation will be from 4 to 6 p.m. Monday at Bayview/Freeborn Funeral Home and one hour prior to the service at the church on Tuesday. Online condolences are welcome at www.bayviewfuneral.com. 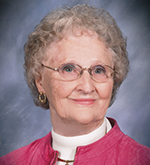 Betty was born Sept. 26, 1925, in Albert Lea to Lars O. and Alpha (Iverson) Grasdalen. She grew up in Albert Lea and graduated from Albert Lea Central High School in 1943. She married John F. (Jack) Ruud on Sept. 2, 1945, at Central Freeborn Lutheran Church in rural Albert Lea. Betty was a long standing and active member of First Lutheran Church in Albert Lea. She was involved in Altar Guild, Sunday school teaching, circle, Bible studies, quilting, delivering communion to the homebound and Holidays Ahead, to list a few. She served wherever she was needed. She was one of the founding group members who started Meals On Wheels in Albert Lea. She volunteered for Red Cross blood drives and served on the board of Bayview Funeral Home. Traveling and playing bridge were some of her favorite pastimes. Her faith, family and friends were the most important things in her life.

Betty was preceded in death by her parents and husband, Jack.

Betty was a wonderful friend, mother, grandmother and great-grandmother and was always there for everyone. Betty’s family would like to give special thanks to all the personnel at Mayo Clinic Health System in Albert Lea Hospice.

Memorials are preferred to Mayo Clinic Health System in Albert Lea Hospice, Happiness is a Blanket of First Lutheran Church, and Youth For Christ’s The Rock.