Dorothy Bernice (Johnsrud) Magelssen died peacefully Monday, Feb. 20, 2017, at Aase Haugen Senior Services in Decorah, Iowa. A graveside service will be at 11:30 a.m. Friday at East Freeborn Lutheran Church Cemetery in rural Albert Lea. Her gravesite is next to her husband of 61 years, Johannes Christian Magelssen.

Dorothy was born March 7, 1923, at her home in Freeborn County, the third of eight children to her parents Bernhard and Clara (Stadheim) Johnsrud. Growing up on her family’s farm, she shared the many daily duties of farm life with her siblings and parents. She attended her local country school, walking 4 to 5 miles daily during the school year, regardless of the weather, through the eighth grade. Then, encouraged by her father, she attended high school in Albert Lea, graduating in the class of 1941. A modest, humble country girl, in her senior year she was elected homecoming queen at Albert Lea High School — the first homecoming queen at the school who was not a city girl. 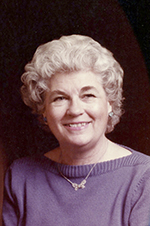 The following year she married Johannes Christian Magelssen, the son of her pastor, Finn Magelssen, at East Freeborn Lutheran Church on June 25, 1942. A few months following their marriage, Johannes was deployed to Europe, serving in the U.S. Army during World War II. With great joy, Dorothy greeted her husband’s safe return from the war in December 1945 with their daughter, Ruth Marie. It was the first time Johannes had seen their precious daughter who was born during his deployment.

During Johannes’ deployment, Dorothy joined several of her high school girlfriends, forming a support group with other young women whose spouses and loved ones were deployed during World War II. Calling themselves the Sewing Club, they met regularly and following the war continued to be very closely bonded in friendship for the remainder of their lives.

Dorothy’s children remember fondly her example of the importance of family and thinking of others before oneself. She provided a loving home and was a true example with her quiet and unfailing Christian faith throughout her life’s journey. Her faithful commitment in caring for her disabled husband for 36 years prior to his death in 2003 and daily expression of optimism despite those challenges was a true inspiration to all. Her family now rejoices that she is home with her Lord.

Fjelstul Funeral Home in Decorah is serving the family. Online condolences may be made at www.fjelstul.com.