A funeral service for Tino will be at 10:30 a.m. Friday at Bride Colonial Chapel, 110 E. Spring St. in Manly. The Rev. George Morin will officiate. Burial will be in Sacred Heart Catholic Cemetery in Manly. Visitation will be from 4 to 7 p.m. with a scriptural wake service at 6:30 p.m. Thursday at the chapel. Visitation will also be one hour prior to the funeral at the chapel. 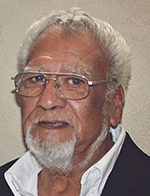 Florentino “Tino” Flores was born Oct. 16, 1942, in Manly, the son of Luis and Margaret (Marmalejo) Flores. He was baptized and confirmed at Sacred Heart Catholic Church in Manly, and attended Sacred Heart Catholic School. Tino worked as a farm laborer for Nolends brothers in Hayward; Becker Highway Freight and Ladlie’s Transportation Co., both in Albert Lea; and Steve’s Automotive as a mechanic in Clarks Grove until his retirement in 2008.

Tino enjoyed hunting, fishing, archery and working on cars, but his greatest love and enjoyment was spending time with his grandchildren and going to their sports activities.

He was a member of Sacred Heart Catholic Church in Manly.

Tino was preceded in death by his parents Luis and Margaret Flores; his mother, Mary Flores; his infant son, Anthony Flores; and brothers John, Demetrius, Valentino and Felix Flores.