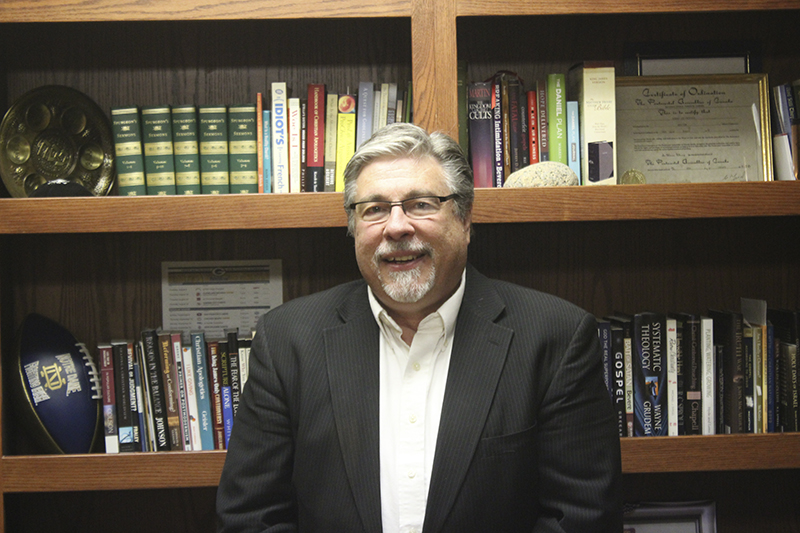 Lee Freshour has been a pastor at Assembly of God church for the past 22 years. His last service will be the first weekend in May. - Jarrod Peterson/Albert Lea Tribune

Assembly of God pastor prepares to retire after 22 years

For some people, it takes a while before they recognize their purpose in life — what they are meant to do.

Lee Freshour, however, recognized his calling much sooner.

At the age of 16, Freshour said God called him to serve a purpose in the church.

“I actually wanted to be a veterinarian when I grew up,” Freshour said. ‘I was raised in a religious home, so church was always there. I guess I came to a point in my life where I needed something more than just church in my life,” Freshour said.

Freshour is a native of Tampa, Florida. He graduated from Brandon High School and went on to study theology at Trinity College of Florida.

Once he was done there, he did some work in the eastern provinces of Canada before heading back to Clearwater Beach, Florida.

That’s when he got his second call from God, calling him and his wife, Tammy, to Albert Lea in the winter of 1994, where they received a chilly welcoming.

“It was the week before Christmas of ’94, and we left Florida and the 80-degree weather,” Freshour said. “We stepped off the plane, and it was 25 degrees. We will never forget it. It was cold.”

Even when the couple moved up to Minnesota in January 1995, and a terrible snowstorm forced them to bunk in Ames, Iowa, their minds didn’t change.

“This is where we were called,” he said.

Fast forward 22 years, which is how long Freshour has been the pastor at Assembly of God Church, and he is preparing for his final service on May 7. He said he couldn’t have been happier with where God led him.

“Albert Lea has been good to us,” he said. “We’ve met so many people and been a part of so many lives. Through the services, the funerals and the marriages to helping people in time of need, it has been a great ride.”

Freshour became a priest in the summer of 1979 and has been a pastor at five churches in his near-38-year career.

Throughout the longevity of his career, Freshour has read the Bible hundreds of times, but he said he never gets tired of reading, teaching or preaching it.

“I have read the Bible many times during my life, but I can still find something that is new to me,” he said. “I just love teaching the word of God. I have seen countless lives change because of it.

“Through the word of God, I have seen people get through addictions, marriages restored and other things. It’s been very rewarding. It’s not any talent in myself. It’s God’s work.”

Being part of the church means going on mission trips to help those in need. Freshour and a group from Assembly of God went down to Mississippi after Hurricane Katrina ravaged hundreds of communities. What he witnessed opened his eyes.

“The devastation was incredible,” he said. “It was awesome to see how appreciative the pastors were. This was after their churches were ruined. It was people coming together to help one another.”

Another highlight he talked about was Ruby’s Pantry, which started three years ago, and is where people can come pick up groceries for $20 on the first Saturday of every month.

“The groceries are donated by corporations, and it’s open to anybody,” Freshour said. “We have seen all kinds of people come get food. I’m really proud of this church for doing that. It’s something to put back into the community.”

Freshour has devoted his life to spreading God’s word and now the church is paying him back with the same kindness and devotion.

There will be a retirement party for Freshour from 2 to 5 p.m. Saturday at Assembly of God Church, one week before he will conduct his final service. A short program is slated for 3 p.m.

As his time winds down as a pastor, Freshour said he is excited about what will be coming next, but he will never stop finding different ways to help people and teach God’s word. He plans to move to the Twin Cities to be closer to his grandchildren.

He said he and his wife couldn’t be any more thankful to the community of Albert Lea.

“I will say that I’ll miss all the wonderful people in this town and surrounding communities,” Freshour said. “It has been a joy to be in Albert Lea for these last 22 years.”