Gerald Dean Mittag, 75, passed away after a short illness on Saturday, April 8, 2017, surrounded by his family at Mercy Hospital in Mason City. 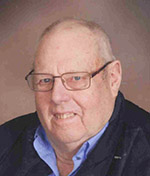 Born March 8, 1942, the son of Gaylen and Pearl (Virchow) Mittag, he was raised and was a lifelong resident of the Myrtle area.

After graduating from Glenville High School in May 1960, Gerald married Arlyce Schilling on Sept. 24, 1960. They resided in rural Myrtle, where together they raised their four children. They ended their marriage in 1989. He was remarried to Judy Draayer the following year, and they were married for 21 years.

Gerald spent his early years farming with his father and also raising livestock, working at the Northwood Sale Barn and hauling cattle. After farming, he worked for Speltz Elevator, Myrtle and McFarland Trucking.

Gerald had a passion for livestock and loved traveling to fairs and livestock shows to watch his children and grandchildren. He also enjoyed meeting new friends, telling jokes, going to auctions, spending time with his family, and wintering in Fort Myers, Florida.

Gerald is preceded in death by his parents and two brothers-in-law, Paul A. Schmidt and Larry Williamson.

A private family graveside service will be take place at Pilgrim’s Rest Cemetery in rural Myrtle. An open house in remembrance of Gerald will be from 2 to 5 p.m. Sunday, April 23, at Bethlehem Lutheran Church in Myrtle. Online condolences are welcome at www.bayviewfuneral.com.