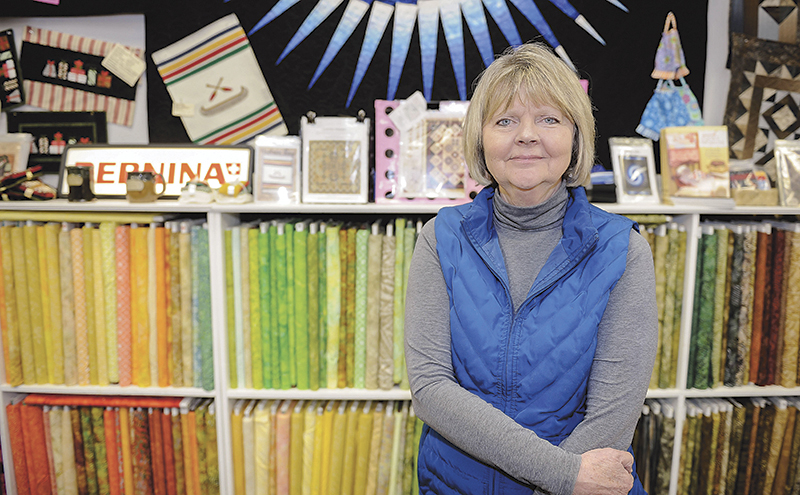 Carolyn Matson, owner of the Calico Hutch in Hayward has one of the most extensive collections of quilting materials in the area and hosts three retreats a year in nearby Austin. - Eric Johnson/Albert Lea Tribune

Calico Hutch retreats provide place to catch up on projects

HAYWARD — Some of the best things in life are those things with the longest-lasting traditions. In part, that might explain why Calico Hutch’s quilting retreats have become so popular.

For 15 years, owner Carolyn Matson has hosted the immensely popular retreats, drawing quilters from all over the state for weekends of quilting and catching up with old friends, while in the process creating an environment that has a lasting impression on those attending.

“It’s a chance to have a whole weekend with your friends, doing something you love with people,” said Karen Morland of Austin, who has attended retreats for 10 years.

Matson bought Calico Hutch in 2002 from LaVonne Williams, who opened the store in 1982. Prior to that, Matson worked at the store for 10 years when she first got into quilting at Williams’ urging.

“I thought, ‘Why would I want to quilt?’” Matson said. “But then I started and just the putting the fabric together and making some blocks and laying the blocks out — it was like I was hooked.”

Matson estimates she made 30 quilts that first year when she started in 1992. When that passion carried over into buying Calico Hutch from Williams, the next step was to offer a retreat.

That first year in 2002, Matson hosted the first retreat in partnership with an Owatonna shop. From there, the retreats blasted off, drawing more and more quilters.

In a short amount of time, Calico Hutch was hosting three retreats a year with “caboose” weekends — three more days with smaller attendances tacked onto Monday, Tuesday and Wednesday after the initial retreat.

Over the years, Calico Hutch teamed with shops both in the Twin Cities and Mankato, but now Matson and her team run the retreats on their own.

While the sudden and rapid success of the retreats was somewhat surprising, what stood out more to Matson was where the quilters were coming from.

“I guess I was surprised, but more surprised where people were willing to drive from to come to them,” she said.

Attendees would drive down from the Twin Cities and from Wisconsin to attend the events. But it wasn’t just people from out of town.

“You don’t have to go far to find something great,” Morland said.

Linda McCormack of Chicago City and Peggy Lang of Maplewood represent just a few of the people who drive from the Minneapolis/St. Paul area. They said the environment continues to draw them back.

“It’s a very warm welcome.” McCormack said. “Everybody is willing to help each other. You couldn’t ask for the staff to be nicer.”

One advantage retreats offer is a chance to get work done without interruptions. Quilters can plan ahead, prep projects and then once in Austin at Holiday Inn Convention Center, they are free to go to work, but it’s not the only thing.

Tables covered with patterns, cloth, quilts and sewing machines fill nearly every corner of the main conference room, leaving pathways crisscrossing like a maze for people to walk.

To some it might seem daunting to navigate the area, but it also affords the opportunity for quilters to get to know their neighbors. It’s a defining trait of the retreats.

“Get some projects done, see your friends you haven’t seen,” Lang explains. “It’s a warm welcome every time you come. It’s a home away from home.”

Sometimes, the quilters spend much of their time catching up with friends met at previous retreats.

“It’s a girl’s weekend,” said JoAnn Malepsy of Albert Lea. “You go around and see what everybody else is doing and pick up ideas and tips.” 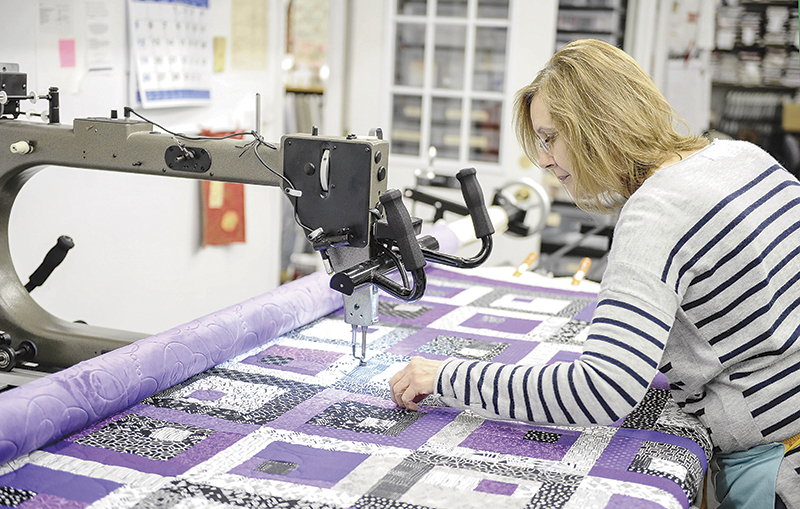 “We sometimes sit visiting and not getting any sewing done,” she said, laughing.

After all, the retreats are set up in a way to not be restrictive.

Of course, Matson and Calico Hutch’s employees set up activities. They pick a theme for each retreat where people dress up and are judged based on their costumes. Games are set up and there is plenty of food, but there are other avenues for quilters. It’s not just a warm environment, but a flexible one.

“People can come and do whatever they want,” Matson said. “We don’t really plan. We plan our meals — they’re specific: start time, end time. We have kind of a loose schedule for demonstrations, but we don’t always know what we’re doing.

“The fun part of it is, I can tell somebody who says, ‘I’ve never been to a quilting retreat, what do I do?’ Well, you just come. You don’t bring a sewing machine nobody is even going to notice.”

At a retreat in February, the unexpected showed up.

As women were busy sewing and working on their quilts, four men, dressed in tuxedos, wandered in and looked around. Before long, they commanded the room’s attention. The quilters stopped their sewing machines, put patterns down and watched as the foursome began singing.

After a couple tunes, the men — Bob Hill, Pete Rush, Roger Pestorious and Larry Lund — having announced themselves as being from Albert Lea’s singing group Harmony Junction, wandered down the isle until they found Malepsy and sang “Irish Rose,” which was set up by her husband for Valentines Day.

It’s just one of the things that can happen during the retreats.

“It’s just really easy going, free-flowing fun,” Matson said. “Everybody gets along well and has a good time.”

Matson said she has toyed with adding another retreat during the summer, but for now is aiming at keeping the three-a-year format. It’s enough to keep her and her staff busy. And as long as people have a good time and reconnect with friends, then Matson is content to watch and be part of the fun.

“It’s fun to see everybody again and it’s fun for them to see each other again,” Matson said. “It’s kind of like a quilting reunion.” 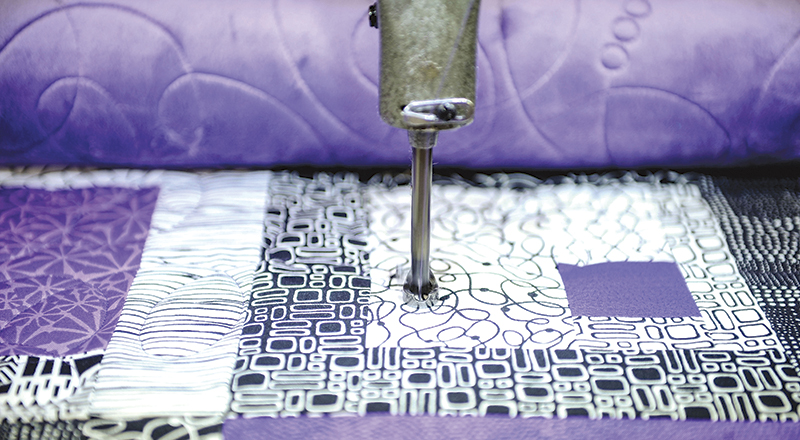