She was preceded in death by her husband of 69 years, William Drenth; her son, Albert Drenth; and her sisters Johanna Lewis and Cornelia Ravenhorst. 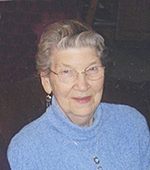 Hermina was born in Iowa, spent most of her life in Hollandale and moved to Kentwood in her later years. She loved Jesus and enjoyed creation by growing beautiful flowers and watching birds and squirrels out her window. She enjoyed people, was an active member of her church and joined Princeton Christian Reformed Church after moving to Michigan. Hermina was a hard worker and kept a Dutch clean house, but did find time to create beautiful needlework. She will be greatly missed.

Her family would like to extend a special thanks to her friends at Princeton Christian Reformed Church and to Shandra, M.S.W. and Louise, RN from Spectrum Health Hospice. Their support was priceless.