Funeral services for Jennie I. Hove will be at 3 p.m. Monday at Bonnerup Funeral Service in Albert Lea. The Rev. Shane Koepke will officiate. Friends may visit from 1 to 3 p.m. Interment will be in Hillcrest Cemetery in Albert Lea. 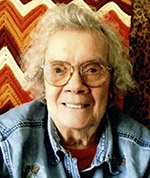 Together, they made their home near Albert Lea and raised six children. Jennie had various jobs around Albert Lea, including Woolworth’s, Eddie’s Bar, Skyline Supper Club and Greenery, as well as Snack Shack. She called bingo for the Albert Lea Hockey Association and in Conger.

Jennie was also a former member of the Moose Auxiliary and belonged to Grace Lutheran Church. In her free time, Jennie could be found in the kitchen — either making her famous Maid-Rites or baking cookies for grandchildren, neighbors or friends. Jennie enjoyed tending to her flower garden and doing word search puzzles. She loved her family and was loved by them in return.