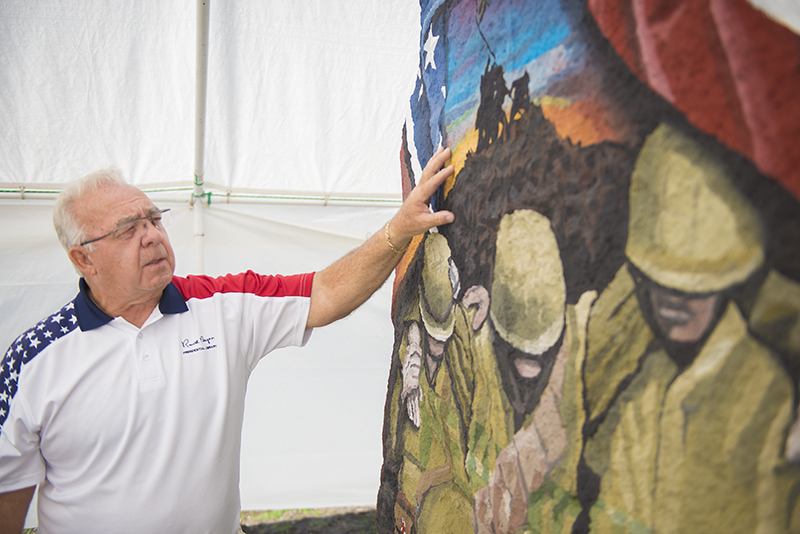 Bill Clark points out different parts of the Freedom Rock and what they represent to him, including a tribute that has the cremated ashes of a local veteran added to the paint. Clark, who served as a United States Marine, spearheaded the Lake Mills Freedom Rock project. - Colleen Harrison/Albert Lea Tribune

LAKE MILLS — Some people tell stories with words. Artist Ray “Bubba” Sorensen does so with paint and imagery that reflects the area’s past as it pays tribute to those who have served his country.

Sorensen, 37, is the painter of the original Freedom Rock in Greenfield, Iowa, which was first painted in 1999. He has repainted the rock every year during Memorial Day weekend as a way to demonstrate his love and respect for those who have served the nation through the armed forces.

Since 2013, he has since gone on a mission to paint Freedom Rocks in every county in Iowa, and Sunday he completed one in Lake Mills.

“I think Senator (Chuck) Grassley had just completed his 99-county tour,” Sorensen said. “They called it the full Grassley, and I thought how neat would it be to have some artwork in all 99 of Iowa’s counties — so that’s where it really came from.” 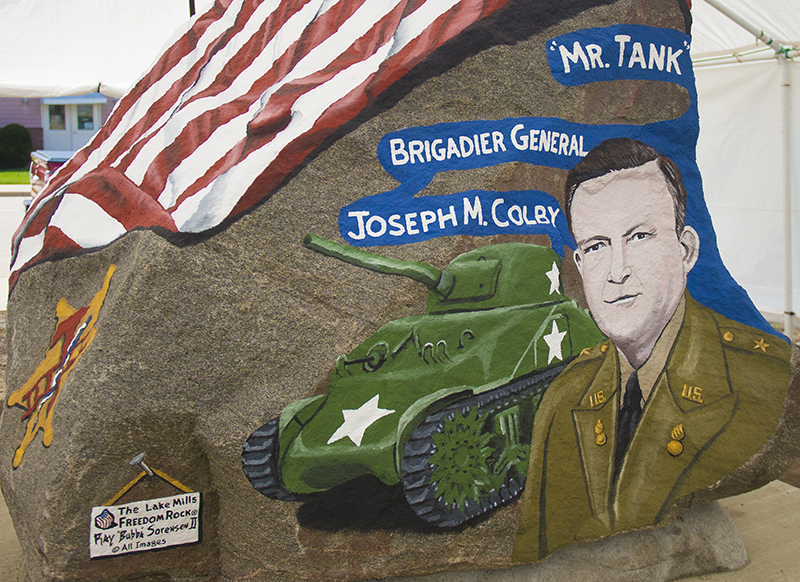 Brigadier Gen. Joseph M. Colby, also known as Mr. Tank, was a Lake Mills graduate who has a portion of the Lake Mills Freedom Rock dedicated to him. The rock was painted by artist Ray “Bubba” Sorensen. – Colleen Harrison/Albert Lea Tribune

Each one of the rocks Sorensen has painted while on the Freedom Rock Tour is unique, yet he admits there are consistent themes. The rocks are meant to show gratitude and appreciation for the nation’s veterans, so eagles, the stars and stripes, and other national symbols frequently appear on the pieces.

“A lot of that is repetitive, and I knew it would be,” he said.

“The idea was not only to promote veterans, but to grow Iowa tourism,” Sorensen said. “To get people to want to visit the next town.”

He sees each rock as an opportunity to tell a story that represents the area it is in.

As a result, there always seems to be some level of debate between the artist and those who commission him to do work for them. 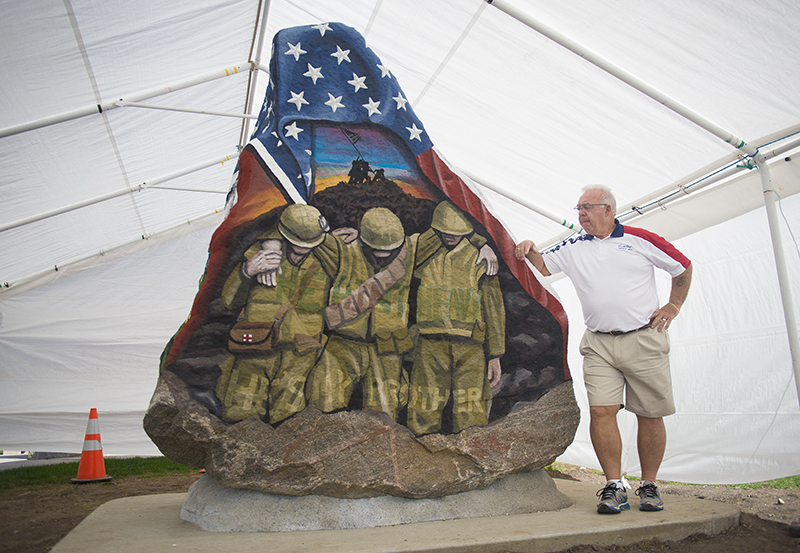 Bill Clark said he has heard many positive comments about the Lake Mills Freedom Rock since it was unveiled. – Colleen Harrison/Albert Lea Tribune

“I always have the Freedom Rock committees send a packet full of ideas. I take those ideas and then come up with a design,” he said.

After viewing his initial design, the committee will usually come back with input on what aspects of the design they like, or changes they’d like him to make.

The front of the rock in Lake Mills shows three veterans, two of which are helping a wounded soldier off the battlefield. Across their bodies it reads, “He ain’t heavy, he’s my brother.” Above that is a silhouette of the flag-raising at Iwo Jima during a sunset, which was the committee’s original idea for that face of the rock. Since the idea was already used, Sorensen compromised by incorporating the scenery at the top of the rock on a smaller scale.

On the left side of the rock is Iowa Gov. Terry Branstad. The Winnebago County native is a veteran and now the longest-serving governor in the nation.

The idea for the back of the rock was actually changed when Sorensen eyed a tank that sits in Arlington Veterans Park in honor of Brigadier Gen. Joseph M. Colby. Colby, also known as Mr. Tank, was a Lake Mills graduate who played a vital role in the design and development of several different types of tanks, including the Grant, Sherman and Patton models, as well as the development of many other armored vehicles and self-propelled artillery weapons used in World War II. 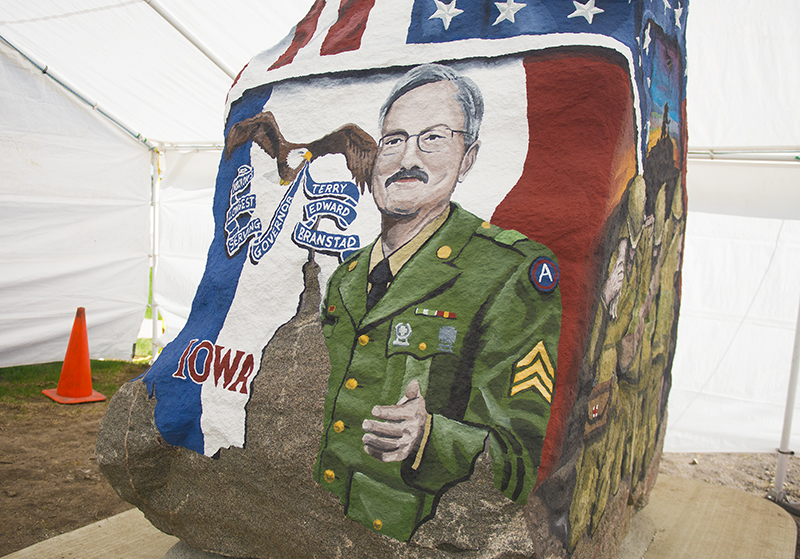 Iowa Gov. Terry Branstad is depicted on a portion of the Lake Mills Freedom Rock. The Winnebago County native is a veteran and now the longest-serving governor in the nation. – Colleen Harrison/Albert Lea Tribune

“I felt he was very unique and kind of the epitome of what I like to put on these rocks,” Sorensen said.

The fourth face of the rock has the stars and stripes of the American flag draped over it, along with the symbols of a police badge, a fireman’s ladder and ax, and the EMS logo.

Sorensen uses a silicate paint, which means there is no organic material in the paint. The choice in paint ensures that once the paint cures it will not fade due to exposure to the sun, and it will hold up to the weather better than acrylic paint would.

“It’s a very good paint to use, and it only works on rock so it’s suited for exactly what I’m doing,” he said.

There is also an extra ingredient in the paint. The cremated ashes of a local veteran were added to the paint, something Sorensen has done in the past with other Freedom Rocks.

While security cameras will watch over the rock, more lighting and landscaping will be added in the weeks and months to come. A purple ribbon will eventually loop around the Freedom Rock and spill into the nearby sidewalk, and the statue of a female soldier will be added to the three male statues that are already at the park in three of the four corners, according to Bill Clark, who spearheaded the Lake Mills Freedom Rock project.

Clark said he couldn’t be happier with how the project has developed so far.

“It turned out better than expected,” Clark said of the rock. “It’s just absolutely beautiful.”

Since the rock was unveiled Tuesday, he’s only received positive comments from members of the community — many of whom made donations toward the Freedom Rock project.

Clark will now collect ashes of other veterans to be added to the rock next year when Sorensen comes to Worth County to do a heritage rock. Clark can be reached at 641-590-2229. 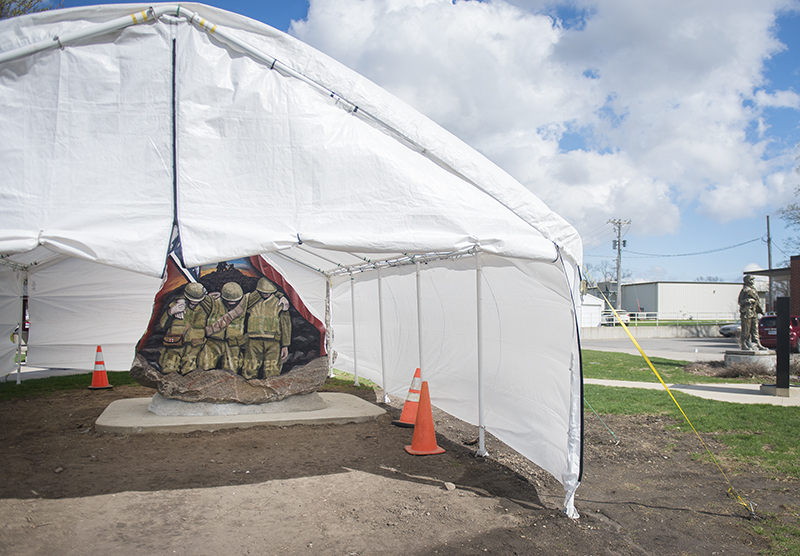 While security cameras will watch over the Lake Mills Freedom Rock, more lighting and landscaping will be added. A statue of a female soldier will be added to the three male statues that are already at Arlington Veterans Park in three of the four corners. – Colleen Harrison/Albert Lea Tribune