The Minnesota Department of Corrections is seeking a Level 3 predatory offender who is no longer complying with the conditions of his release from prison.

Michael James Costa was released from prison on July 25 to intensive supervised release by Olmsted County. He has been on fugitive status since April 14, when he fled away from his supervision while residing in Rochester. 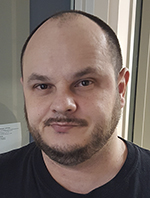 He was last seen leaving his residence on a black mountain bike wearing a black leather jacket and black jeans. He is known to use the aliases Maliik Gouli and Malik Mujaheed Hassan Costa.

Costa is 38 years old. He is Caucasian, has brown hair and brown eyes and is 5 feet, 6 inches tall and weighs 190 pounds. He has three documented tattoos: left wrist, right forearm and right calf.

Citizens should not attempt to confront Costa. Anyone with information on his whereabouts is asked to call 911 or the DOC investigator assigned to the case at 651-361- 7777.