A man is in custody after allegedly stabbing another man early Saturday in Albert Lea.

According to Albert Lea police, Travis Anthony Larsen, 32, is being held on preliminary charges of felony second-degree assault.

Officers were dispatched at approximately 5:20 a.m. to a residence on the 400-block of Lynwood Drive on a report of an assault with a weapon. 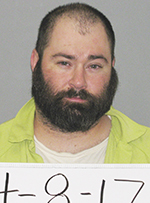 Officers reportedly found a man with injuries determined to be from a stabbing. The man, who was later transported to Mayo Clinic Health System in Albert Lea via ambulance, was later released.

The victim’s name has not been released.

Larsen was reportedly found hiding in the residence. He was arrested and transported to the Freeborn County jail.

Police were assisted by the Freeborn County Sheriff’s Office on scene.