Funeral services for Natividad “Maria” Muniz of Albert Lea will be at 11 a.m. Monday at St. Theodore Catholic Church in Albert Lea. The Rev. Russell Scepaniak will officiate. Visitation will be one hour prior to the service at the church. 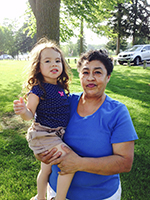 Maria was born Sept. 8, 1957, in San Luis Potosi, Mexico, the daughter of Feliz and Maria (Padilla) Ramirez. She had made her home in Albert Lea since 2001 and had been employed as a nurse’s aide at St John’s Lutheran Community and Thorne Crest Senior Living Community.

Maria had a green thumb and enjoyed gardening and flowers. She loved spending time with her family. The greatest loves of her life were her sons.