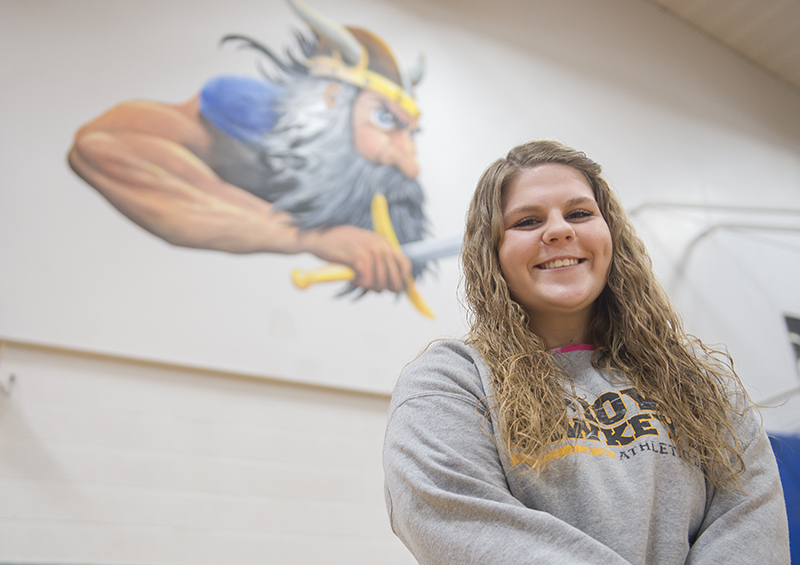 Dusti Bratrud is a junior at Northwood-Kensett High School, and is preparing to return to her track and field team after recovering from open heart surgery. - Colleen Harrison/Albert Lea Tribune

NORTHWOOD — Being a teenager comes with its own set of challenges, but for the typical teenager, major surgery usually isn’t one of them.

Dusti Bratrud was 6 months old when doctors realized she had aortic stenosis — a severe narrowing of the aorta, which is the valve in the largest blood vessel branching off of the heart. She was also diagnosed with a bicuspid aortic valve — meaning she only had two flaps instead of three to help circulate blood flow through the heart and into the aorta.

Bratrud’s parents were told their daughter would eventually need some kind of procedure done to allow more blood to circulate through the valve; it was only a question of when.

Fast forward to Bratrud’s junior year at Northwood-Kensett High School. A four-sport athlete for the Vikings, Bratrud said technically she wasn’t supposed to be playing sports at all.

“(The doctors) didn’t like that I was doing it, but I wasn’t going to just sit there,” she said.

The only sport Bratrud was cleared for was volleyball, but she still competed in softball, basketball and track and field.

It was when she started to have dizzy spells where her vision would blackout, she’d start to sweat profusely and at times would get physically sick that Bratrud realized she needed to re-evaluate the situation. She and her family decided it was time to find a solution.

Bratrud had a catheter balloon valvuloplasty in December 2016 — a procedure that is supposed to widen the narrowed heart valve without the heart actually being operated on. Other than helping to cut Bratrud’s basketball season short, the catheter balloon had no effect. Given the option of trying the procedure again, Bratrud said they opted for going another route.

On Feb. 21 Bratrud underwent open heart surgery. The surgery entailed the insertion of a titanium ring and the same valve sack found to encase valves near a cow’s heart to help facilitate blood flow. Bratrud said she went with the bovine valve instead of a mechanical one, because a mechanical replacement would’ve taken away any chance of Bratrud playing sports again or of ever being able to have children. The new components should last for 15 years, and Bratrud shouldn’t require open heart surgery again for her condition.

Bratrud’s recovery has been better than average. After spending just four days in the hospital following her surgery — with the average being 10 to 15 days — she returned to school less than a week later. She has completed a cardiac rehab regimen, and said she is feeling much better and no longer feels the pressure on her heart from the weak blood circulation.

The biggest surprise through the whole ordeal for Bratrud has been the support of her community. In addition to having her family, friends and coaches rallying for her, she received cards and well wishes from just about everyone else in her community as well during her hospital stay in Iowa City and once she returned home — even from people she either didn’t know that well or hadn’t kept in touch with.

As Bratrud is enrolled in a certified nursing assistant program through school, she couldn’t complete the physical parts of her course that included being able to lift and assist potential patients while she was recovering from surgery. Instead of Bratrud having to retake the course next school year, the school district is paying for her to be able to finish the course this summer. She said she’d like to eventually be a pediatric nurse, especially after being around the pediatric ICU nurses during her hospital stay.

While the surgery cut short her basketball season, Bratrud should still be able to compete in track and field. A returning state tournament qualifier in shot put and discus, Bratrud was set to be cleared to start practicing with her teammates today. The first meet she should be able to compete in will be Monday at Northwood-Kensett — which also happens to be her 17th birthday.

Having to watch her teammates practice and compete in the first meets of the season without her was hard, Bratrud said. She was not used to standing on sidelines and watching, so she looks forward to everything going back to normal.

“It’ll be a good birthday present,” she said.

Interesting fact: Bratrud likes to hang out with friends, see movies, go swimming or bowling, and do puzzles in her spare time