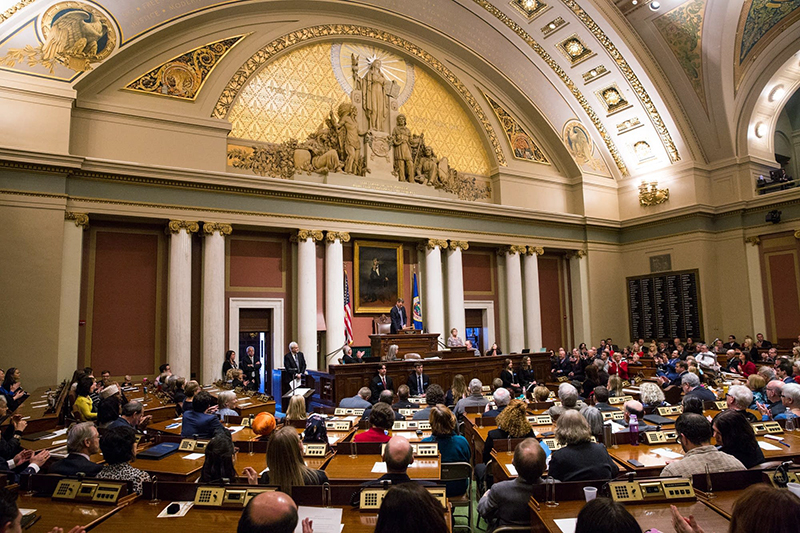 A busy time is likely ahead for the Minnesota House floor. - Evan Frost/MPR News file

After break, tough budget negotiations set to begin at Capitol

DFL Gov. Mark Dayton and Republican legislative leaders have some big differences to work out in the remaining five weeks of the 2017 session after their Easter/Passover break.

After a series of marathon sessions to pass budget bills last week, Senate Majority Leader Paul Gazelka, R-Nisswa, said he would spend his time off on a beach. He wouldn’t say where.

“We know once we get back, we’re going to be very busy negotiating with the governor, and I want to be totally refreshed when I do that,” he said.

Gazelka took the helm of his caucus after an election that gave Senate Republicans a narrow 34-33 majority. Since then, he has been talking about a change in tone, which he hopes will make for smoother negotiations in the session’s final weeks.

“The House, Senate and governor I think are talking more,” he said. “The benefit of that is you can communicate what areas are non-negotiable and what areas that you disagree on are still negotiable. So, it’s never easy, but I’m looking forward to the challenge.”

Gazelka said things he must have include “significant tax relief” and a funding package for roads and bridges that does not include the gas tax increase favored by Dayton.

The biggest sticking point will likely be the governor’s insistence on more money for pre-kindergarten, Gazelka said. The Senate keeps pre-K funding flat, while the House eliminates it.

“What ought to drive that discussion is what’s best for 4-year-olds, and not what the biases are of various adults,” he said.

Dayton rolled out his two-year budget plan back in January. He has had only a short time to digest the competing House and Senate proposals, but has found plenty that he doesn’t like. His list of objections includes delayed enforcement of the state buffer law, weakening of the Public Utilities Commission, cuts to mass transit and cuts to state agencies.

There’s also disagreement over basic budget numbers, and Dayton wants that cleared up before negotiations begin.

Republican House Speaker Kurt Daudt said he wants a transparent conference committee process to work out the budget differences. Daudt said he also wants the governor and his staff fully engaged in the talks to reach a three-way agreement.

But Daudt, who is not vacationing this week, is looking for the governor to move closer to the House position, not the other way around.

“Minnesotans have worked really hard, and through their prosperity have provided us with a surplus,” Daudt said. “I think it’s incumbent on us to respect that, where that came from, how we got it.”

There’s a $1 billion gap between the House Republicans’ tax cut proposal and the governor’s. The Senate GOP’s $900 million plan falls in between. Dayton has repeatedly said he won’t put the state’s fiscal health at risk with overly generous tax cuts.

“I think the point they’re missing on that is the governor doesn’t need one. He just doesn’t need one,” Bakk said. “We haven’t had one the last two years and the state’s been doing just fine. If they don’t get serious about a tax bill, that’s just not going to happen. But the budget does have to happen.”