Krista Ross took charge of SELCO (Southeastern Libraries Cooperating) as executive director on Monday, stepping in to lead the 11-county regional system serving public, academic, school and special libraries. She has more than 24 years of experience in various areas of the library world, including positions as library clerk, reference librarian and library director, according to a press release.

Prior to joining the staff at SELCO, she served 11 years as system director in the Southwest Wisconsin Library System, providing services to 28 member public libraries in a large geographic area with diverse needs. 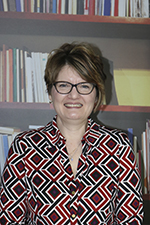 “I believe libraries are stronger when they work together,” Ross said. “I look forward to joining the SELCO staff and member libraries as we continue the SELCO traditions of innovation and collaboration. I am passionately committed to providing the resources and support for staff development and member library success.”

Ross has been active in the wider Wisconsin library community, a member of the Wisconsin Library Association since 1999. She has served on various committees, including the WLA Library Development and Legislation Committee. She recently chaired the task force, implementing the WLA Leadership Development Institute, and had the honor of serving as the 2014 WLA board president. She has also served on workgroups and committees charged with studying the future of public library systems in Wisconsin. She has been involved with the Public Library System Redesign project, serving as the facilitator for the delivery workgroup since 2016. Ross has also been a mentor for the Bremer Rural Libraries and Literacy Institute (Wisconsin) and Wisconsin ILEAD.

As Ross begins her tenure, former Executive Director Ann Hutton remained on staff through Friday to ensure a smooth transition.