Al Batt: How can you tell the gender of a honey bee? What is a herptile? 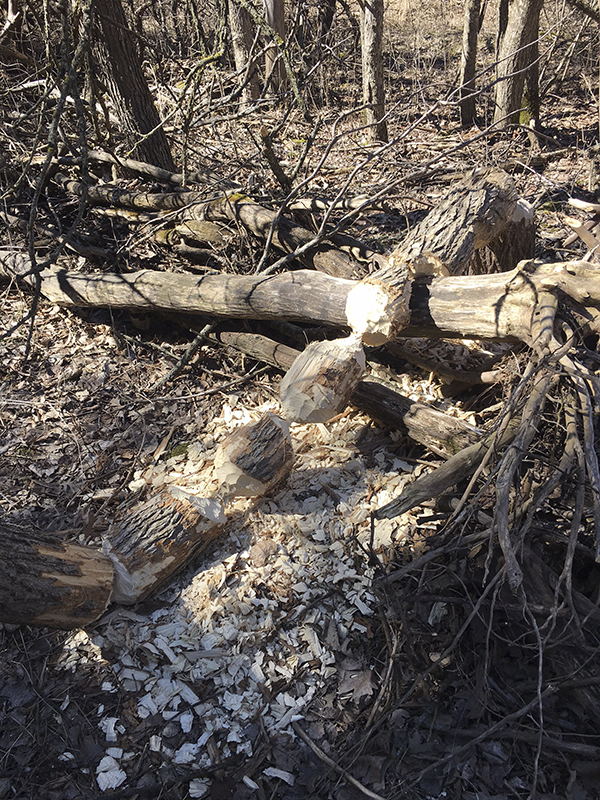 Tim and Hilary Rinehart found traces of what appeared to be beaver activity on their property. Provided

“Everything is nearly copacetic. I was so tired yesterday that I felt like Still Bill, who makes more dust than miles. I even wished I had a remote for my TV remote. Oh, did you hear about Pinhead who works down at Bowling Elaine’s?”

“Pinhead’s family had to always be different. When we were boys, they had a white-and-black TV, and ate potatoes and meat or fries and burgers. His foot was hurting him, so Pinhead limped in to see the doctor. He ended up at the eye doctor’s instead of the foot doctor’s. I guess his eyes weren’t working any better than his foot.”

It was a beautiful January day. Unfortunately, it was nearly May.

I walked in the falling snow, my steps sustained by the singing of house finches.

It is a beautiful world and beautiful bird song as background music helps it be so.

“What is a herptile?” The dictionary definition of herptile is denoting, relating to or characterizing both reptiles and amphibians. Herpetology is the branch of zoology concerned with the study of amphibians and reptiles.

“I saw a flock of Canada geese fly over in a V-formation. One of the birds was small enough to be a mallard. What was it?” It could have been a mallard. I’ve seen one flying with a flock of geese. If it looked like a small Canada goose, it might have been a cackling goose. A cackling goose is small, not much bigger than a mallard. Cackling geese have proportionately smaller bills than a Canada and Canadas can be more than twice the size of cackling geese.

Diane Mlnarik asked what she could do about a cardinal attacking a window. Female birds have been known to do this, but it’s mostly male birds that attack windows. The reason is basic. In spring, cardinals claim territories. Cardinals seldom share territories with other cardinals. When a male cardinal spots another male, a chasing fight ensues. The dominant male gets a mate, the nesting location, the territory and the area’s food. The loser develops an inferiority complex. When a cardinal sees its reflection in a window, it’s seeing another cardinal in its territory. The cardinal attacks until the other cardinal goes away. A real cardinal would flee, but the reflection remains. Being persistent and stubborn, the cardinal continues to attack its reflection. He may stop on his own, but you might stop him blocking the image. An easy way to do this is to put a piece of cardboard or plastic cling on the outside of the window where the bird is attacking. Soaping that area works. It might cause the bird to take its fight to another window. This may cause Martha Stewart to shudder, but, in most cases, you won’t have to keep it up for long–just until the shadowboxing cardinal thinks his worthy adversary has departed. I had to cover a car’s rearview mirror with a paper bag to calm a cardinal.

Hilary Rinehart of Mankato wrote, “My son (Tim Rinehart) found this on his farm and was very surprised to see the tree chewed up like this. A friend that knows beavers thought it might have been done by an older beaver, but had never seen anything like this. Just thought I would share this with you and would welcome any comments you might have.” Hilary referred to it as a beaver necklace, a wonderful description, and it’s a remarkable piece of beaver work. A log carved into distinct pieces that remain connected. I suspect the tree might have been chewed down, but became hung up in the branches of another tree. The beaver attempted to get the rest of the tree to fall by making more deep cuts in the trunk, moving higher with each one until finally getting it to drop. This activity must have taken a long time to complete. I hope that the crown of that tree didn’t remain entangled in the other tree and be unreachable. That would deprive the beaver of the thinner branches and new shoots it uses for food and building materials. No matter what happened, it left an amazing piece of sculpture for us to appreciate.

“How can I tell if a honey bee is a female or a male?” If the bee is working, it’s a female. Only females forage. The males eat pollen, but they don’t collect it.

“You are educated when you have the ability to listen to almost anything without losing your temper or self-confidence.” — Robert Frost

“Look deep into nature and you will understand everything better.” — Albert Einstein