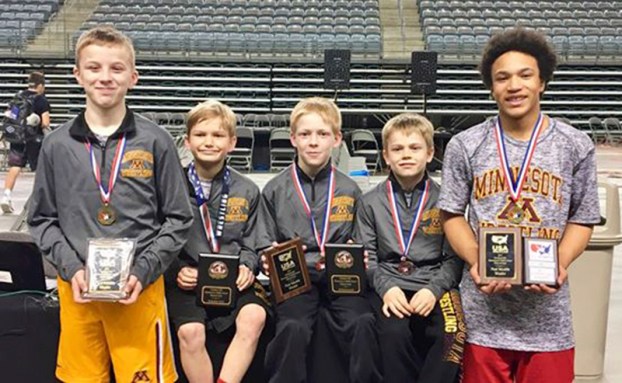 Five Albert Lea area youth wrestlers were selected to be part of three Minnesota teams to compete April 13-15 at the Heartland USA Elementary National Duals in Council Bluffs, Iowa, according to a press release.

Representing Minnesota Storm was sixth-grader Derrick McMillian, who went undefeated at the tournament, earned All-American honors and was named Most Valuable Wrestler.

Minnesota Storm won the tournament by dominating Pennsylvania in the finals.

Representing Minnesota Lightning — which placed 14th overall — were fourth-grader Logan Davis and  fifth-grader Mike Olson, who went undefeated at the tournament to earn All-American honors and receive Most Valuable Wrestler.

Albert Lea area wrestling varsity-assistant and youth coach Andy Hackenmueller said it was great having five wrestlers from the program represent their school and their state at the national level.

“It is a testament to those kids and the amount of time and effort they have put in; it is also reassuring knowing that the Albert Lea Program will be competitive for a long time with those young leaders coming up,” Hackenmueller said in response to each Minnesota team recognizing an Albert Lea Wrestler as MVW.

A’s stop slide with win over the Twins

MINNEAPOLIS — The Oakland Athletics’ slumping offense strung some hits together in a much-needed victory. Seeing the A’s offense have... read more