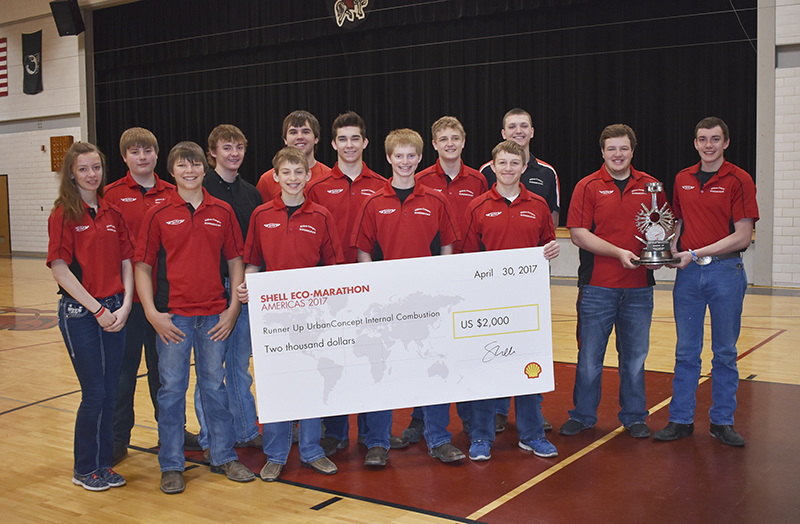 Alden-Conger’s supermileage team advanced over the weekend to the world championship. - Provided

More than 1,200 students from across North and South America gathered over the weekend in Detroit to compete in the 11th annual Shell Eco-marathon Americas competition — a unique, global competition that challenges students to push the boundaries of energy efficiency on the road.

On Sunday afternoon, the top performing UrbanConcept Americas teams earned the right to compete in the Shell Drivers’ World Championship Regional Final — a competition for the best UrbanConcept category teams to find out who is the fastest energy-efficient driver.

The Alden-Conger Knights 3 team came in second place in the competition with 457 mpg and will now prepare to compete for the Drivers’ World Championship Title amongst winning teams from Asia and Europe, and earn a once-in-a-lifetime experience at the home of Scuderia Ferrari.

Thirteen of Alden-Conger’s brightest engineers came home with a trophy and a check, ready to head back to London to compete.

“Our car should be in a crate in Chicago (Tuesday), and on its way over to London from there,” said supermileage team member Logan Sailor.

According to team member Josh Majerus, Shell pays for nine members, which includes chaperones, to make the trip.

“It works out well with the number of seniors, juniors and sophomores on the team,” he said. “We are excited about having this opportunity.”

A unique competition in London will bring together around 200 teams and 3,000 students from across Europe, America and Asia, to battle for ultra energy efficiency on the road. The track will be on the streets of London. The urban track will present the teams with a challenge set-up, putting their driving skills and strategy to the test.

“We plan to be head to London May 22 and will stay through the 29th,” Majerus said. “The actual competition will take place on May 25.”

As for the other car ran by the Knights in Detroit, that was a success as well.

Jacob Songstad drove the Prototype, while Grayden Thompson was the team captain for this vehicle.

“Our goal was just to beat our personal best with that same car,” Sailor said. “In Detroit we ended up in eighth place, getting 1045 mpg.”

This year, the competition had changed.

“All the cars were combined into one group, ICE, which stands for Internal Combustion Engine,” Thompson said. “In the past, the diesels were played individually.”

According to Songstad, they were happy with the results after having some wiring issues.

“We missed a teach inspection and had to overhaul the entire wiring of the car,” he said. “In the end, it was just a simple fuse.”

Although between the car’s wiring problems and getting fuel, “the final run could have changed everything,” Songstad said. “But we were still happy with how it all turned out.”

The Alden-Conger supermileage team will compete May 14 to 16 in Brainerd, before heading to London to compete at the end of May. The team will have an assembly at 8:30 a.m. May 18 before leaving for London.